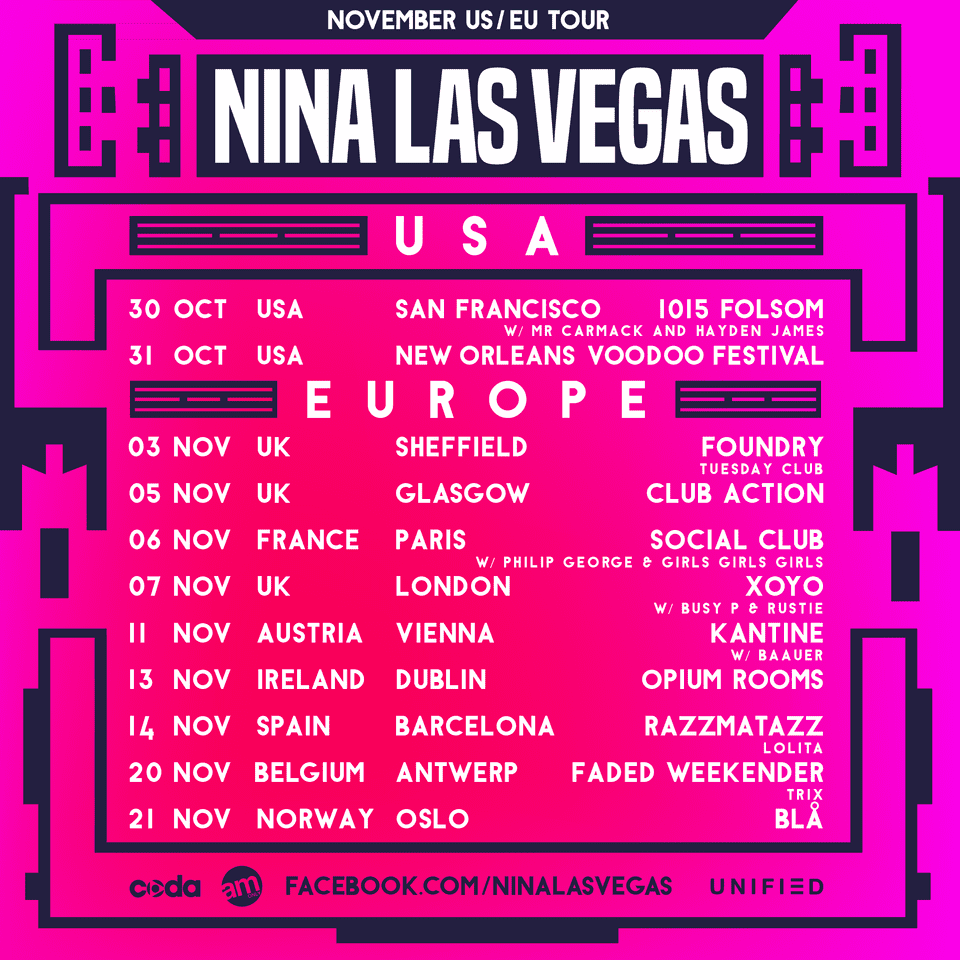 Nina Agzarian, aka Nina Las Vegas, a longstanding radio presenter and all-round Australian tastemaker on triple j now announces her extended 9-date tour spanning across the UK and continental Europe. After a hugely successful European debut tour with Lucky Me’s Eclair Fifi and Joseph Marinetti earlier this year, ongoing demand from her continental fan base compelled Nina to return before the year was up. Kicking off the tour in the UK, Nina will travel through seven European countries eventually finishing her circuit in Oslo, Norway. The news comes as Nina announces her departure from triple j radio in order to pursue another venture, the beginning of her record label NLV Records.

As a key component of the Australian underground dance scene, instrumental in the breakthrough careers of many who broke the global scene such as Flume, Ta-Ku, What So Not and many more, Nina’s knowledge of dance music is understandably exhaustive. The Australian DJ extraordinaire will no doubt be using this expertise and showcasing her eclectic track selection that she is world-renowned for. What’s more, as a champion for genre defying underground dance music across the globe, Nina’s sets are exceptionally varied and riveting. As Nina reaches European shores, she will play three UK dates in Sheffield, Glasgow and a show at London’s fabled XOYO with Busy P and Rustie. Moving onto the continent to play at iconic clubs in Paris, Vienna (alongside American hitmaker Baauer), Dublin, Barcelona, Antwerp and finally Oslo, Nina will have the opportunity to give Europe a true taste of her all-encompassing musical range.

A truly influential figure in the Australian dance music scene, and with a consummate passion for unearthing and promoting newfound talent, Nina’s 10-year spell in broadcast radio has seen her gain a dedicated fan base down under and around the world. As the inimitable voice of Saturday night on triple j, Nina has played at a string of major festivals and served as a special guest to stars Pharrell, Mark Ronson, MIA and many more. Whether it’s working on her next original release, continuing to promote her NLV presents brand, or running NLV Records, Nina is constantly championing and uncovering eclectic and essential underground music. Serving as an acronym for her name, NLV Records is truly the embodiment of Nina’s ethic towards dance music, committed to original and outstanding underground dance music the label is set for a blockbusting debut release.