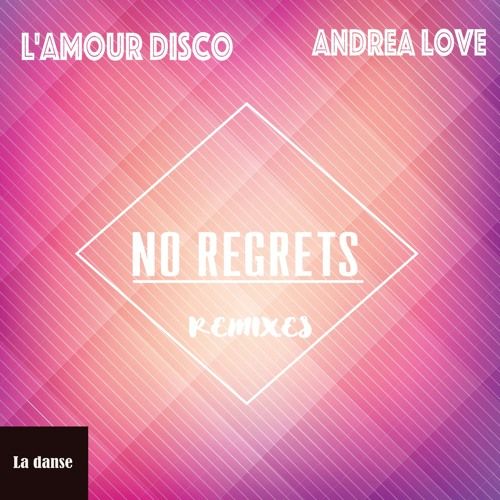 Originally released in Spring to great acclaim, with it’s heartbeat firmly planted in NY Disco, ‘No Regrets’ from L’amour Disco and Chicago Diva Andrea Love now gets a full glittering make-over for a brand new release in time for the party season on La Danse Music! The remixes encapsulate the essence of Andrea’s vocal prowess crossing into House and Nu Disco genres. BKT‘s Latin Excursion mix brings his signature Soulful vibe with a scintillating dance floor groover. The Tekky Vibez remixes go straight for the peak time House jugular, whilst Disco House sparkle is a plenty courtesy of Neon Lights. Topping off the package with an Old Skool House outing is Geekski.

L’amour Disco is the Disco pseudonym of London based producer/session musician, Markus Williams, who has mainly worked behind-the-scenes in the world of production and has made remixes notably Shock & Chic Pres. Barbara Tucker & Inaya Day ‘Do You Think Of Me’. He also records under the guis Tekky Vibez & Geekski.

Influenced by Gospel, with Jazz and R&B overtones and a vocal range over 5 octaves, Chicago singer/songwriter Andrea Love is undeniably a musical force to be reckoned with. She has worked with some of music’s hottest producers and artists including George Duke, Michael Manson, Terri Lyne Carrington, Chante Moore, Ledisi, Lalah Hathaway, Rahsaan Patterson, Al Jarreau, Maurice Joshua, Oleta Adams, Frank McComb, Esperanza Spalding and Terisa Griffin, among many others.