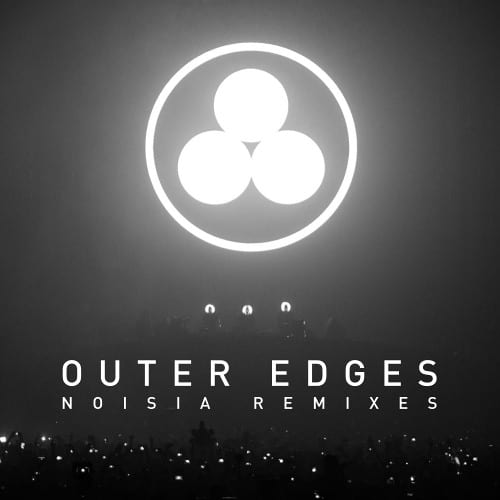 Noisia have dropped the much-anticipated ‘Outer Edges Noisia Remixes’ EP. Out now, the 5 track release features their new remixes of ‘Voodoo’, ‘Tommy’s Theme’, ‘Dead Limit’ (their collaboration with The Upbeats), ‘Diplodocus’, and ‘Surfaceless’; each of the tracks having been a major highlight of their recent Outer Edges audio visual shows.

Unveiled last year, Noisia’s Outer Edges show raised the bar for electronic music performances. After the launch at Czech Republic’s Let It Roll festival, the band headlined the likes of Sziget, Pukkelpop, Lowlands, and SW4. Tour highlights include selling out their ‘Outer Edges’ shows in London (Electric Brixton) and Amsterdam (Melkweg) months in advance, and a recent headline show at Rampage, the biggest indoor bass music event in the world (capacity 15,000).

With one of the largest and most committed fanbases in electronic music, Noisia have transcended their genre and grown into a phenomenon in their own right. While drum & bass is at the core of Noisia’s sound, their visceral brand of electronic music has always ventured further, and the trio has continuously pushed boundaries through their own music and via collaborations with artists like Amon Tobin. This attitude extends outside of the studio and into the curation of the Noisia Invites events and their DJ shows, where they share stages with the likes of Skrillex, Andy C, Gaslamp Killer and Chase & Status.

“We’ve recently been playing some of our own new remixes during the 'Outer Edges' audiovisual shows and decided to make them release worthy. We treated 'Voodoo' (our personal favorite at the moment), 'Dead Limit', 'Diplodocus', 'Tommy's Theme' and 'Surfaceless'. Hope you enjoy!" – Noisia