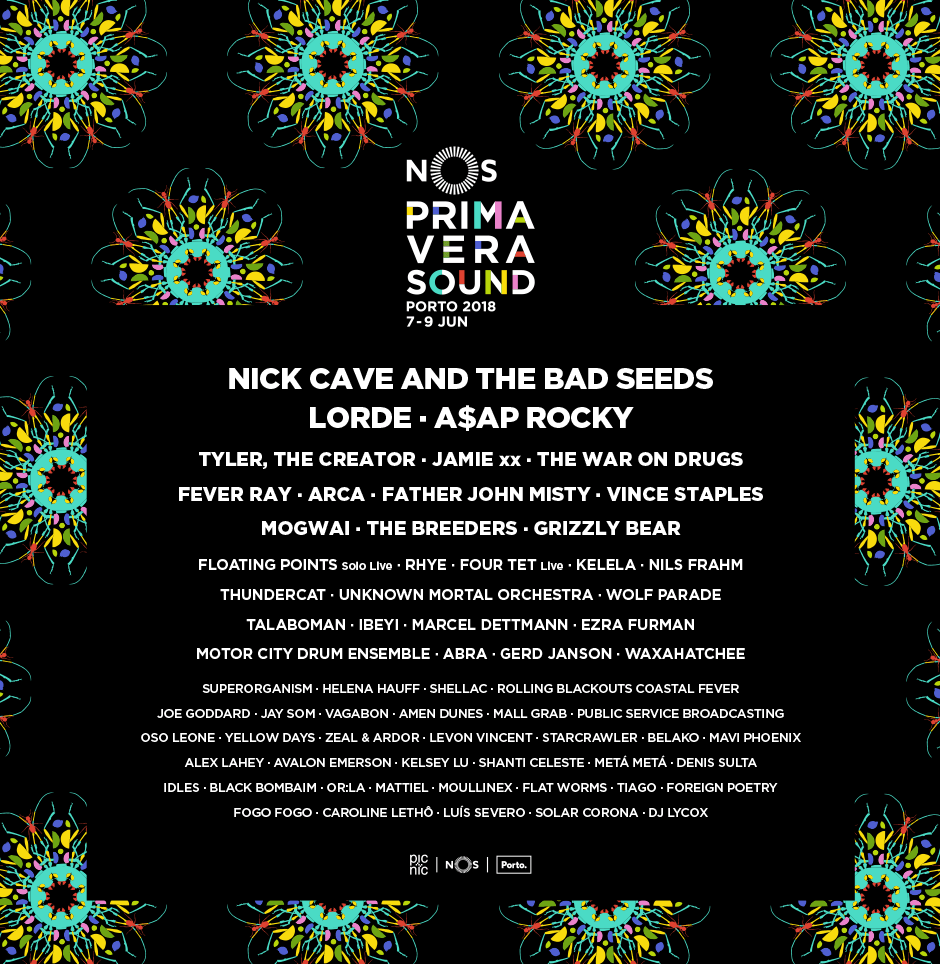 After Primavera Sound revealed its lineup for this year’s edition, NOS Primavera Sound presents its line-up. The festival’s seventh edition continues to grow, after breaking its audience record in 2017 with around 90.000 people.

THE RECOGNITION OF THREE GENERATIONS

The three major headliners for NOS Primavera Sound 2018 explain, decisively, the contemporary music of today: alongside the rock-without-a-safety-net by Nick Cave and The Bad Seeds, who will present the cathartic and now classic Skeleton Tree on stage, will be A$AP Rocky, the new worldwide king of hip hop (who will be showcasing his anticipated third album), and this century’s rising pop music star,Lorde, critically acclaimed with her second album, Melodrama. Classicism, modernity and future, all together in one lineup.

A LINEUP IN THE PRESENT

Added to the headliners is a set of other names, who represent the festival’s DNA. From The War On Drugs, now one of this generation’s crucial bands, to the unstoppable Jamie xx in his DJ guise, through heavyweight artists such as Father John Misty and Mogwai, the sonicavant-garde of Arca, the risqué sound of Fever Ray and Nils Frahm, indie rock classics like Grizzly Bear, Ezra Furman and Wolf Parade, R&B phenomenon Rhye and Abra or the multicoloured psychedelic sound of Unknown Mortal Orchestra.

Only a complete, diverse and risky lineup can place, side by side, the unrelenting metal of Zeal & Ardor, the urban pop of Mavi Phoenix and the uncompromising pop of Flat Worms, the soundscape of Public Service Broadcasting and the exacerbated hedonism of Gerd Janson, the electronic experimentation of Four Tet (live) and obscure singer-songwriter Yellow Days.

Just like its brother in Barcelona, NOS Primavera Sound doesn’t forget the current music scene, and besides A$AP Rocky, the festival has performances by two of the biggest stars in the genre, in the form of Vince Staples and Tyler, The Creator, both with new and celebrated albums to showcase, and also different variations on the genre, such as Kelela, the styleblender that is Thundercat or French-cubans Ibeyi.

NOS PRIMAVERA SOUND IS WRITTEN IN THE FEMININE

Ready to show why the future of music is female, women will also be a part of the engine of NOS Primavera Sound 2018. New leader Lorde, headlining, will be well surrounded by names with long careers such as Fever Ray and The Breeders, besides a deafening trail of new artists, from the above mentioned Kelela, Ibeyi and Mavi Phoenix to Waxahatchee, Kelsey Lu, Superorganism, Jay Som, Vagabon, Alex Lahey, Belako and Mattiel, through Helena Hauff, Shanti Celeste and OR:LA and Avalon Emerson in electronica.

And in electronica the festival shows a strong presence, with new representatives of the genre such as Jamie xx, Floating Points (in a Solo Live format) and Four Tet (to showcase the new album, New Energy, live) together with stimulating propositions such as Talaboman (the union of John Talabot and Axel Boman), Joe Goddard (the soul of Hot Chip), Marcel Dettmann, Motor City Drum Ensemble, Denis Sulta, Levon Vincent, Mall Grab and Helena Hauff.

THERE IS NO SMALL PRINT HERE

Alongside the return of names which are well known to the festival, like Shellac, NOS Primavera Sound once again shows that it’s betting on those who will be the headliners of the future. Among them are the addictive day-glow pop ofSuperorganism, the nocturnal melodies by Yellow Days, the explosive Starcrawlerand the refreshing guitars of Rolling Blackouts Coastal Fever, as well as Idles, Metá Metá and Belako and Oso Leone, two of the bands in the Spanish music scene with the highest international projection. From the Portuguese scene comeFogo Fogo, with their musical homage to the rhythms of Cape Vert, the pulsating rock of Solar Corona, the promise now turned into a certainty, by merit of his new acclaimed album, Luís Severo, the result of an exchange of ideas between two composers and multiinstrumentalists that became Foreign Poetry, the power-trio Black Bombaim, the house, disco and other mixings of Tiago, Caroline Lethô and DJ Lycox and Moullinex, a powerhouse of Portuguese electronica, back to records with a message of political assertion and the celebration of the dance floor.

Through the Viagens & Vantagens program, Via Verde offers an integrated solution to go to NOS Primavera Sound: the Via Verde festival pack offers, for the price of a festival pass, a discount on tolls, fuel voucher and free parking close to the festival site.