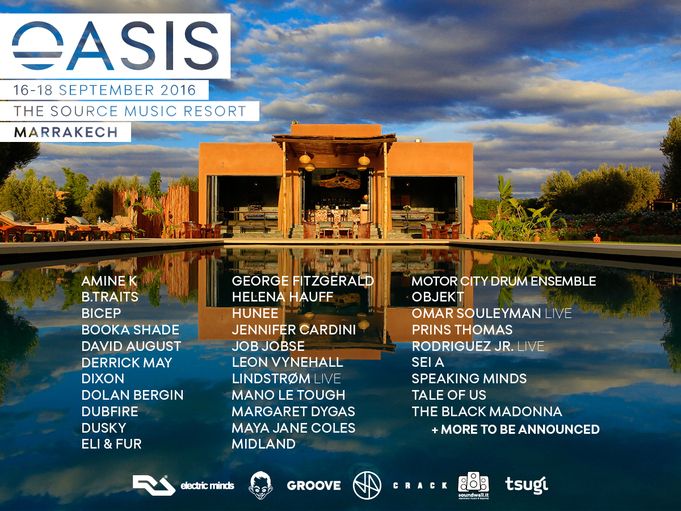 Maya Jane Coles is set to make her Oasis debut in 2016! One of the UK’s most in-demand DJs and producers, Coles has collaborated with artists from Tricky to Karin Park, remixed the likes of Booka Shade, Bonobo and Sia, as well as being sampled by American rapper Nicki Minaj. With a string of acclaimed house EPs, successful debut album Comfort and two highly regarded compilations for DJ Kicks and Fabric, hers is a star that continues to rise. Oasis also welcomes Dubfire to Marrakech. Since rising to prominence as one half of Deep Dish, Iranian-American DJ and producer Ali Shirazinia has forged a hugely successful solo career, and this year celebrates 10 years as a solo artist. Continuing to push the boundaries of dance music, most recently with his cutting-edge HYBRID live show, the SCI+TEC label head is one of the techno scene's most prolific and well-respected producers.

Full Pupp founder Prins Thomas has been making waves once again with his latest LP, ‘Principe Del Norte’. A masterclass in ambient music, awash with vintage synths and the Norwegian producer’s trademark cosmic beats, the album is designed to take the listener on a voyage into the deepest spaces of their mind, a journey familiar to anyone who has experienced one of his many marathon sets. Be ready to watch a true maestro in action when Thomas Moen Hermansen steps behind the turntables at Oasis. German producer David August, whose compelling signature sound and complex live shows have ensured he’s been riding consistently high in the Resident Advisor Top Live Acts poll in recent years, also makes his first appearance at Oasis this September.

Oasis will also play host to a series of live sessions from the scene’s most revered artists, including Syrian artist and former wedding singer Omar Souleyman who is set to bring his uplifting Arabic songs and Middle Eastern rhythms to Oasis for what is guaranteed to be an unmissable show. Disco aficionado Lindstrøm also stars, along with French piano-house prodigy and Mobilee mainstay Rodriguez Junior, whose infectious energy and impressive skills on the keys never fail to ignite the dancefloor!

Next up, Brighton’s Leon Vynehall, who has carved out a reputation for himself as one of house music's brightest producers, with debut LP ‘Music for the Uninvited’, anthems like 'It’s Just’ and his recent BBC Radio 1 Essential Mix garnering a whole lot of attention and for very good reason. Long-time Panorama Bar resident and Perlon regular Margaret Dygas also steps up for a much anticipated DJ set along with Hotflush affiliate George Fitzgerald and Golden Pudel resident DJ Helena Hauff, who has been on an unstoppable rise of late, with 2015 debut LP 'Discreet Desires' receiving widespread critical acclaim. Revered producer Motor City Drum Ensemble, Dutch selector and former Trouw resident Job Jobse, and German duo Booka Shade also join the bill, along with BBC Radio 1’s B. Traits and rising duo Eli & Fur who were a firm favourite amongst last years Oasis attendees. With Midland, Sei A, Speaking Minds, Morocco’s Amine K and Electric Minds Dolan Bergin, also confirmed today, the second edition of Oasis is shaping up to be one of this summer’s must-visit festivals!

In an exciting step forward for Oasis, the second edition will take place in the luxurious surroundings of The Source in Marrakech. With music at the heart of everything it stands for, this private resort is a picture-perfect setting for Oasis, with inviting stage-side swimming pools, intimate dancefloors, an atmospheric amphitheater, plush gardens and stunning views of the nearby Atlas Mountains. Imagine this space filled with friends and like-minded people, enjoying sun-kissed days, dramatic sunsets and starlit nights all soundtracked by the finest disco, house and electronica acts around, and you’re somewhere close to the unique, unparalleled experience that Oasis brings.

Find your Oasis this summer. Early Bird tickets priced at just £110, and packages starting from £170 (including hotel and festival wristband), are on sale now at theoasisfest.com.