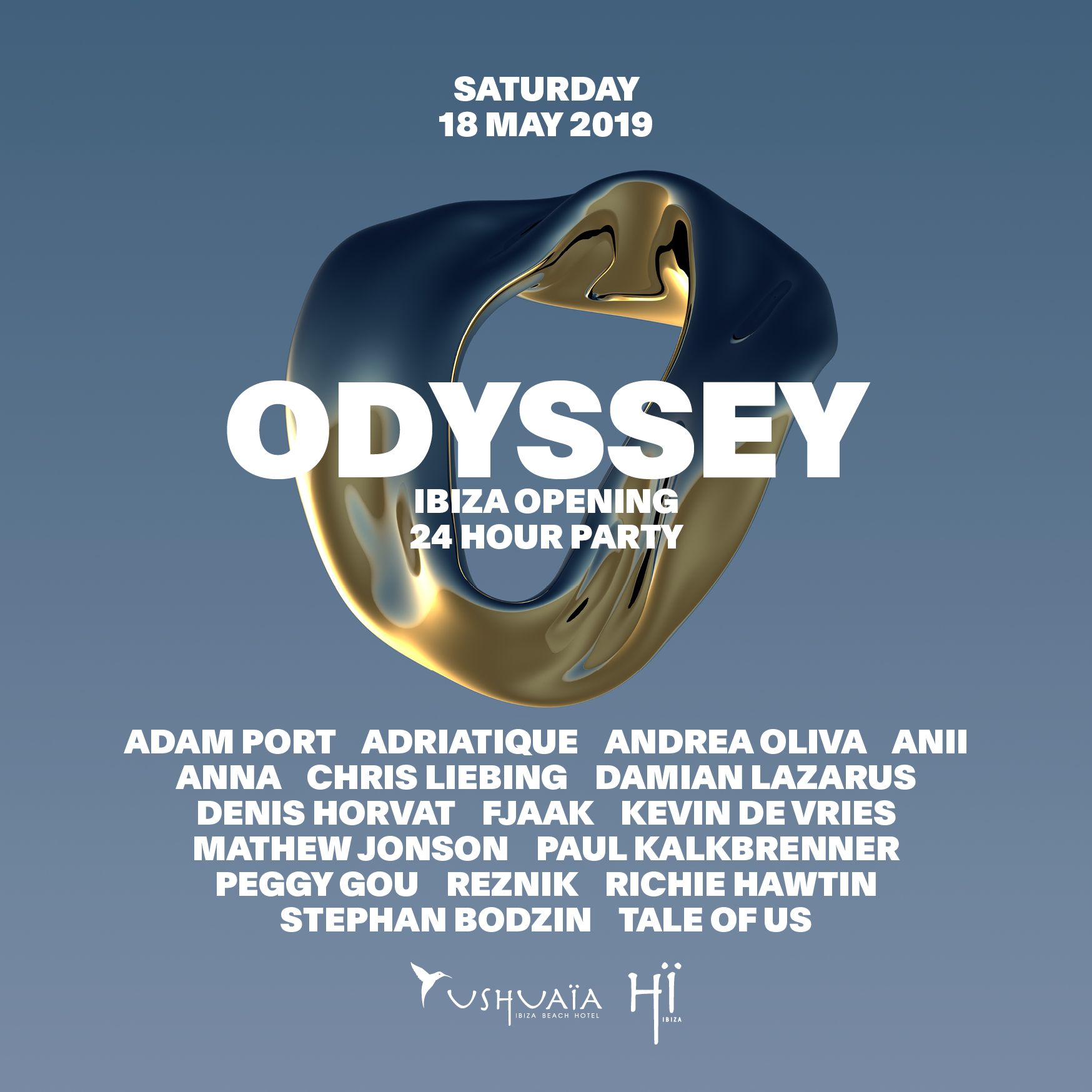 The Night League, the team behind the award-winning Ushuaïa and Hï Ibiza ,today reveals the line-up for Odyssey, a 24-hour opening party extravaganza taking place at Ushuaïa and Hï Ibiza on 18 May. This will be the first time two Ibiza superclubs have come together to throw an unforgettable 24-hour, outdoor-indoor opening party and have brought together a world-class roster of some of the most sought after underground acts to celebrate

Taking the reigns at the iconic Ushuaïa Ibiza from midday to midnight will be revered Italian production partnership Tale Of Us, joined by German techno don Stephan Bodzin (live), one of Berlin's most popular artists Paul Kalkbrenner (live), rising icon Peggy Gou along with Copenhagen based DJ & producer Denis Horvat, rising Kompakt selector Anni and Keinemusik collective’s Reznik (who soundtracked the Odyssey teaser video). Clubbers will be able to party through the daytime and sunset at Ushuaïa for the first instalment of what promises to be the most epic opening party to date.

Then on to the award-winning Hï Ibiza when the sun goes down from midnight to midday, for the second instalment, where Germany’s finest Adam Port will take the baton at 12pm in the ‘Theatre’ (main room). He will be followed by one of techno’s most sought after duos Adriatique and Crosstown Rebels boss Damian Lazarus, before the incomparable Richie Hawtin steps up to the plate to play his Hï Ibiza debut. Tale Of Us will then return to bring the 24-hour extravaganza to an epic close, a true celebration of underground techno at its best.

Looking after proceedings in the ‘Club’ (room 2) Kevin de Vries will kick things off, handing over to one of Brazil’s finest exports ANNA, followed by Ibiza favourite Andrea Oliva, Canadian prodigy Mathew Jonson (live), Berlin techno duo FJAAK and deep techno stalwart Chris Liebing who will close the room. All these acts will provide the perfect soundtrack for an unforgettable opening, keeping the dancefloor moving right through until midday on Sunday.

Marking the official opening of both clubs and heralding the start to the 2019 Ibiza season, Odyssey is set to be a ground-breaking start to the summer. For the ultimate opening party experience, clubbers can opt for a 24-hour pass which gives access to both venues for the duration of the event, or individual day or night passes. Tickets are now on sale at www.odyssey.art – grab yours now before they fly.

Get ready for a truly groundbreaking opening for the Ibiza season. Both 24 Hour Passes and individual tickets can be bought at www.odyssey.art

18 May 2019 / Midday Saturday to Midday Sunday
Midday to 12am at Ushuaïa Ibiza
From12am to Midday at Hï Ibiza
24 Hour Passes on sale now: www.odyssey.art