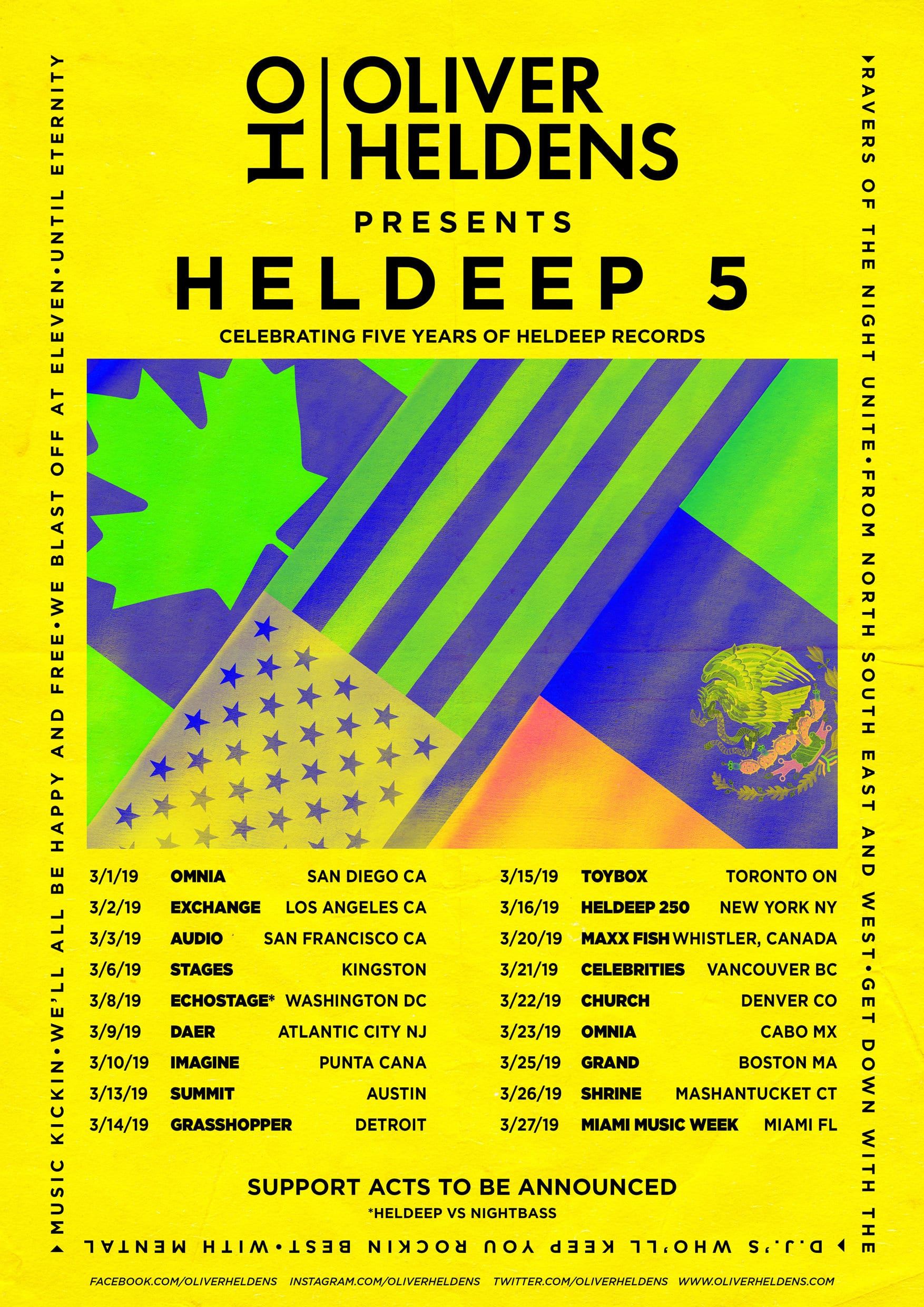 Oliver Heldens just announced the mammoth ‘Heldeep 5 Tour’ which will take him through the USA, Canada and Mexico. Kicking off in March 2019, the 18-date trip will sweep through world-class venues such as Echostage in Washington DC, Exchange in Los Angeles, and a special Heldeep 250 show in New York (full list below).

The NYC show will celebrate 5 years of Heldeep Radio as well as the radio shows’ 250th episode.  Heldens’ set that night will be live streamed on Facebook and recorded for the triumphant episode.

To celebrate 5 Years of Heldeep Radio and to mark the 250th episode of the globally recognized radio show that reaches over 70 million people a week, the event in New York will be live-streamed on to Facebook and other platforms. Heldeep Radio 250 will be a live recording of Oliver Heldens’ set.

Tickets for the tour will be available for sale starting Thursday, January 10th at 10:00 AM PST.  For more information on the tour and where to purchase tickets, please visit: https://oliverheldens.com/tour/.

With over 650 shows under his belt, Oliver Heldens is flaunted on the billing of top-festivals around the world like Coachella, Glastonburry, Lollapoolza and countless others. The ‘Heldeep 5 Tour’ will be the perfect showcase of the knowledge and experiences he has picked up from residencies in Ibiza and Las Vegas, and the Heldeep Records label he runs.

The tour comes on the heels of Helden’s release of his first major label debut single, “Fire In My Soul” ft. Shungudzo (watch the video here). Billboard called the track, “an absolute blaze,” while Dancing Astronaut said the single “could be Heldens most infectious and groovy offering of the year.” In addition, Heldens’ released three remixes of the track from Justin Caruso, Gil Sandersand Tom Staar.

Just as the name suggests, 2019 marks 5 years of Heldeep Records. The Dutch/DJ producer founded the label to create a platform to showcase the new music of budding producers. In only five years, Oliver Heldens has grown Heldeep Records into a fully-fledged label, featuring respected mainstay acts like ALOK, Chocolate Puma, & Dada Life as well as hosting stages at leading festivals across the globe like Tomorrowland, Electric Forest, Spring Awakening Music Festival and South West Four.

On March 16th, Heldeep Radio will celebrate their 250th episode, and revellers attending the New York show that evening are in for a special treat. More details to follow.

About Oliver Heldens
23-year-old Dutch star, Oliver Heldens stands out from the crowd with his own distinctive sound, counting numerous No. 1 hits and over 1 billion cumulative streams to his name. As well as being one of the most talented producers in the game, he is also officially one of the world’s favorite house DJs, recently crowned #9 in the DJ Mag Top 100 for 2018.  His relentless tour schedule continues to place him at the forefront of the global DJ circuit bringing his eclectic, high-octane sound to over 2.5 million fans annually playing over 130+ shows including headlining and playing major festivals such as Coachella, Lollapalooza, Tomorrowland, EDC, Ultra and more.