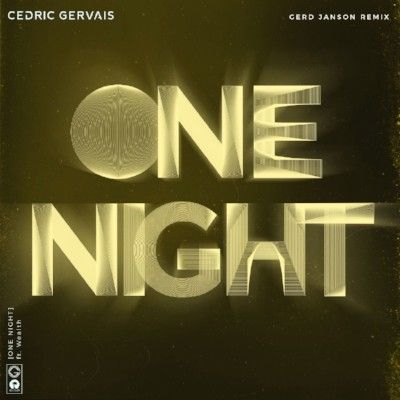 Having launched his own label Running Back with Thorsten Scheu, Gerd Janson is widely credited with the rise of jungle music in his homeland, after a long-term residency at Mannheim’s legendary Milk Club.
Switching to more slick, house-led beats in modern times, Gerd’s remix of ‘One Night’ relies on silky smooth chords, and an irresistible breakdown. The Running Back label boss’ interpretation followsSuperlover’s ‘Sex In The Disco’ remix, D.O.D’s dynamic rework and Cedric’s own festival + club mixes.

With a total of over a billion combined streams to date and multi-platinum Top 10 singles across theBillboard, UK and ARIA Charts to his name, Cedric has become one of the most in-demand electronic music producers in the world today. In 2013, he received monumental success from his smart rework of Lana Del Rey’s ‘Summertime Sadness’, which gained the French producer a coveted Grammy Award for‘Best Remix’. Cedric went on to collaborate with a diverse range of musical acts including, David Guetta, Miley Cyrus, ODESZA and Sigala.

Currently captivating audiences worldwide with his energetic sets, Cedric has held multiple residencies in New York, Miami, Atlantic City, Los Angeles and Las Vegas – all to critical acclaim. He returned to this year’s Miami Music Week with a headline show at LIV Miami before playing at the 20th Anniversary of Ultra Music Festival. Armed with a hectic touring schedule, Cedric will travel to Europe this summer where he’ll give eagerly awaited festival appearances at Tomorrowland and Benicassim. Not stopping there, the French producer will return to Ibiza, where he’ll play alongside David Guetta at Ushuaïa Ibiza.