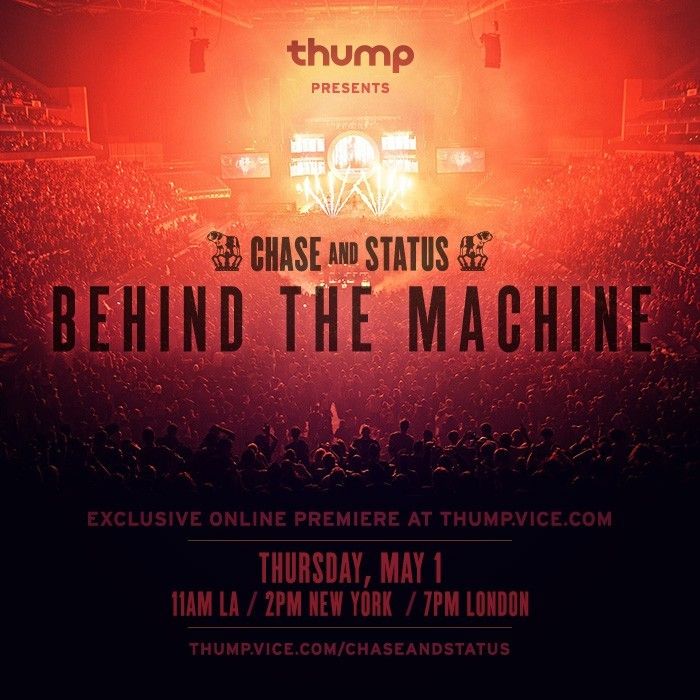 At the end of October last year, to coincide with the release of their third studio album ‘Brand New Machine’, which reached Number 2 in the official UK charts, Chase & Status headed out on their biggest Live tour to date. We sent a camera crew on tour with them to document the highs and lows of a tour of this scale, and the resulting documentary ‘Behind The Machine’ will be premiered on THUMP – http://thump.vice.com/chaseandstatus – at 7pm GMT this Thursday 1st May. The video will be exclusively streamed online for the first time, and Chase & Status will be watching along whilst taking part in a live chat throughout the stream, giving fans the opportunity to chat with them and ask questions about the documentary and the tour.

Along with MC Rage and their drummer Andy Gangadeen, Will Kennard and Saul Milton embarked on the Brand New Machine UK Arena Tour at the end of last year, which saw them play Arenas in Nottingham, Aberdeen, Glasgow, Cardiff, Manchester, Newcastle, Plymouth, Bournemouth, Birmingham, Brighton and finished off with a landmark, sold out, homecoming show at London’s O2 Arena, which was streamed on the Chase & Status YouTube channel (see highlights HERE).

The band were also joined by on tour by a host of special guests who featured on the album, Pusha T, Jacob Banks, Tempa T, Liam Bailey, Moko, Knytro, Louis M^ttrs and Elli Ingram. This made for a large, and at times raucous, touring party, electrifying performances across the country and along with the carnage that Chase & Status Live shows are renowned for, has resulted in a very watchable, and highly entertaining live documentary. Make sure you tune in to this exclusive online premiere.

Chase & Status head to North America for the Brand New Machine North American Tour in May, for more info and tickets: http://chaseandstatus.co.uk/brand-new-machine-north-american-tour/