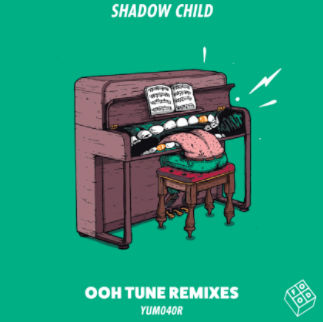 Danny’s version of the track upgrades the original with a tougher bassline, underpinning the distinctive “Ooh” vocal and uplifting piano chords that make the track such a hit. This extended version also includes a climactic breakdown with accelerating drums, making this a perfect weapon for Danny’s peak time sets at the likes of Amnesia and Hi Ibiza. The remix cements Danny’s status as a Food Music staple; he’s released two EPs on the label throughout 2017, June’s ‘Work That / Holla’ and the more recent ‘Feel Real / Kid’, released early December.

With the original version of ‘OOH Tune’ receiving a wealth of support from the biggest names in the industry, including Annie Mac, and Eats Everything, who has been frequently spinning the track in his live sets, Shadow Child has carved a reputation as one of the most influential artists on the scene. His hugely popular weekly slot on Rinse FM, plays the best in house and techno every Wednesday from 9pm to 11pm, featuring tracks from the likes of Dusky, Andrea Oliva and Jamie Jones.

The remix marks an exciting new chapter in the career of Danny Howard with the Blackpool-born producer recently making his Friday night debut on BBC Radio 1 alongside Annie Mac and Pete Tong.. “At the beginning of the year, I would say more people knew me for DJ’ing,” says Danny. “But I want to change that and step up my production game. I want to represent the dance music world 360 degrees in terms of my radio shows, events and my own music.”

Having enjoyed a hectic 2017 touring schedule, Danny has played shows at Creamfields, Privilege Ibiza,  Cafe Mambo, and Sziget Festival premiering many of the track selections from his label, Nothing Else Matters. He also debuted his ‘The Following meets Nothing Else Matters’ stage at SW4 this summer, where Danny teamed up with UK trio Disciples to crossover their brands and curate a festival line-up including Erick Morillo, Icarus, Riton, and Sam Divine, at the Clapham event.