Will Monotone - Out Of Line EP 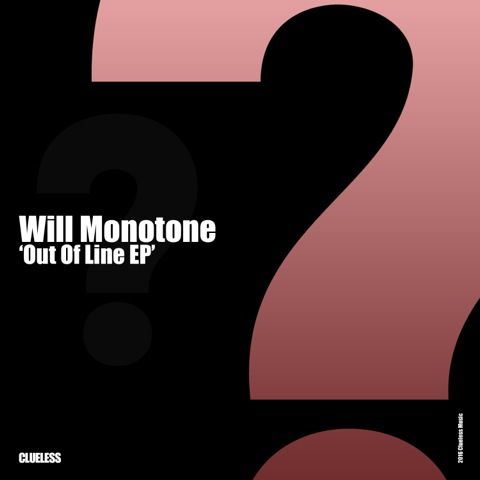 Will Monotone - Out Of Line EP

Putting it's final touch to 2016, Clueless rounds the year off with a bang by welcoming accomplished Boston native, Will Monotone to the family. Making his Clueless debut with a thumping 2 track EP titled; 'Out Of Line', Monotone spares nothing as he delivers his trademark tech-house flavour, the title track a perfect A-side with it's infectious melody, punchy drum kicks and piercing 909 rides. Gracing the B-side is 'Bring It Down', a lighter compliment to it's edgier counterpart yet  still fierce with it's addictive percussion groove and rumbling bassline.

Will Monotone started his musical journey on Boston's dancefloors, securing a 10 year residency at the city's notorious, RISE nightclub – after moving to NYC, he began the production game, releasing his first single, 'Here In Spirit' featuring the legendary Alan T on Kult Records under the alias Fama. Garnering support from Danny Tenaglia & DJ Vibe to name a couple, Will went on to launch record label, Sub Society which still attracts strong attention from industry greats with it's groovy tech influenced productions. With a discography that includes Viva Music, Get Physical, Defected and Material Series under his belt, Will Monotone has become a household name, delivering his astonishingly impressive first artist album, 'In Colour' on Sub Society earlier this year, which, consisting of 21 tracks, took 3 years to complete and saw collaborations with the likes of Wally Lopez, Steve Porter, Demuir, J Paul Getto and Daniel Dubb.

A successful year behind it, Man Without A Clue's label, Clueless Music has continued to grow from strength to strength, racking up radio plays and chart success with each release it drops – with a huge amount of tastemaker support across the industry, Clueless prepares for another breakthrough year in 2017.

Will Monotone's 'Out Of Line' EP drops exclusively on Traxsource 16th December.