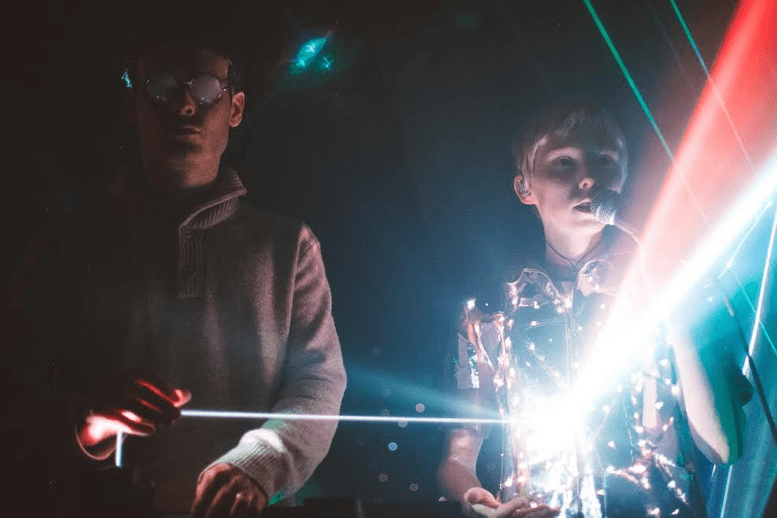 Sound of Ceres — featuring Candy Claws’ Karen Hover and Ryan Hover, The Drums’ Jacob Graham, Apples In Stereo’s Ben Phelan, and guitarist Derrick Bozich — today shared a new video for their single “Outer Century” from their latest album The Twin produced by Alex Somers (Sigur Rós, Julianna Barwick) out now on Joyful Noise Recordings (joyfulnoi.se/TheTwin). Made and directed by band member Jacob Graham in his studio’s closet, the video captures what Brooklyn Magazine described as the band’s “simple, beautiful, utterly beguiling visual display, somewhere between a hologram and a laser show. Stars draw themselves in mid-air while rotating in three dimensions, small shapes squish and fly around, and tiny red galaxies explode in the air, all in time with the music.” Graham cites the classic magic trick Pepper’s Ghost, used in Disney's Haunted Mansion ride, as just one source of inspiration. Watch the video here: youtu.be/dLnLCrOPEgw

Working without any post-production, Graham says, "The video was shot in a large closet in my Brooklyn apartment. I wanted the visuals to be minimal to reflect the music's torch song feeling, so I only used very basic elements like glass, metal, water, sand, and light. All effects – lens flares, puppetry of light, etc – were done in-camera." The band is bringing this special live show on tour dates across America, with upcoming dates in Boise, Denver, St. Louis, and more. Tour trailer: youtu.be/mfSF6AufwRc&nbsp;