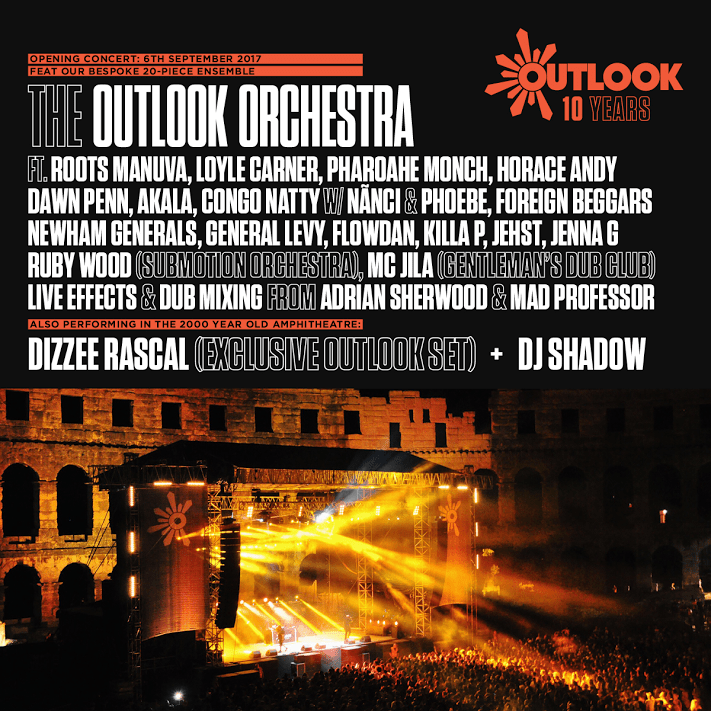 Fresh from sell-out shows in London and Bristol, eclectic super-group The Outlook Orchestra are set to bring its magic to Pula’s 2000 year old amphitheatre. On Wednesday 6th August, the stunning, and sparsely used venue sees the likes of Loyle Carner, Horace Andy, Dawn Penn, Akala, and more perform an exclusive 100 minute mix of Outlook anthems for an utterly unmissable show. Headlining the rest of the show is legendary Bow MC Dizzee Rascal, with an exclusive set created for Outlook, and trip-hop pioneer DJ Shadow bringing a different vibe. With a limited capacity at this truly unique venue, grab a second release ticket and celebrate ten years of Outlook Festival with us: outlookfestival.com/tickets.

Witness UK rap royalty as Roots Manuva brings the hype, alongside new kid on the block Loyle Carner, who has been widely praised since the release of his debut album earlier this year. From across the pond Pharaohe Monch adds hard hitting hiphop flavours, plus roots originator and Massive Attack collaborator Horace Andy is on hand to provide his unique sound. Anyone who has seen Dawn Pennperform can testify to her incredible vocal and energetic show – so Outlook are incredibly excited to have reggae’s first lady over in Croatia this year for the first time. Representing junglists the world over, Rebel MC himself Congo Natty alongside iconic dub songstresses Nãnci & Phoebe. OG MCs the Newham Generals (D Double E and Footsie) and Killa P will be hotting up mics on the night, with the likes of MOBO award winner Akala, double team Foreign Beggars and the veteran and Incredible singer General Levy, YNR Productions head honcho Jehst all on board for the show of epic proportions. The instantly recognisable tones of Roll Deep founding member Flowdan will fill the amphitheatre, whilst Queen of D&B Jenna G and Submotion Orchestra’s Ruby Wood are set to stun with sultry tunes. Rounding off the mega bill for the show, which opens the decade celebration of Outlook Festival, are Gentleman’s Dub Club’s very own MC Jila, with live mixing from experts Adrian Sherwood and Mad Professor.