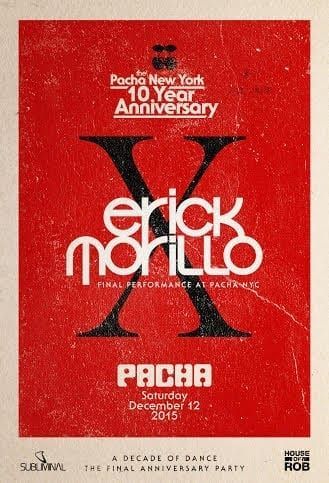 The most earth-shaking decade in the history of electronic dance music took place on the Pacha dance floor.

For 10 years, it was the home of the New York-style 24-plus-hour marathon; where EDM tested its chops and earned its stripes; where stars were born and fans were converted. It gave legendary promoter Rob Fernandez a room to transform, weekend in and weekend out. It cooled you off with nitrogen and heated you up with shower dancers. It was the only reason you went West of 11th Avenue (unless your car got towed).

This January, Pacha New York – lauded as one of the top nightclubs in the world by DJ Mag magazine, and “Best Superclub” at the Club World Awards for 5 years – is closing its doors for good. But not until after a month of unforgettable, need-to-be-there, best-parties-of-your-life, culminating in a marathon classics set with 46th Street staple, Jonathan Peters.

“The average nightclub lasts 18 months – we lasted 120,” says Pacha New York’s president, Eddie Dean.“It’s been a wild ride that none of us will ever forget. Our final parties will celebrate the different artists, styles, and scenes that have made Pacha great.”

Just how major has Pacha’s run been? The numbers don’t lie:

6 million fans gracing our dance floor for over 12,000 hours. That’s more than 1,500 shows over 500 weeks. We’ve had many marriages, quite a few divorces, and at least 522 babies conceived. Fans have burned close to 10 billion calories over ten years, while our barbacks have ran  nearly 10 thousand miles (burning a million calories), carrying over 2 million bottles of alcohol (enough to fill 2 Olympic sized swimming pools!).

The anniversary month will feature a centerpiece show on Saturday December 12 by none other than Erick Morillo, Pacha’s founding resident DJ and chairman of the board.

Pacha is proud to mark our decade of NYC dance dominance going back to our roots, capping our run with one final New Year’s Eve party, a 72-hour marathon classics set with West 46th Street veteran, Jonathan Peters.

Pacha is proud to mark our decade of NYC dance dominance with one final New Year’s Eve party, a 72-hour marathon classics set taking us back to our roots with West 46th Street veteran, Jonathan Peters.

As for the closing party..  we’re capping our run with a series of closing parties in January 2016, featuring the who’s who of dance music, from past to present