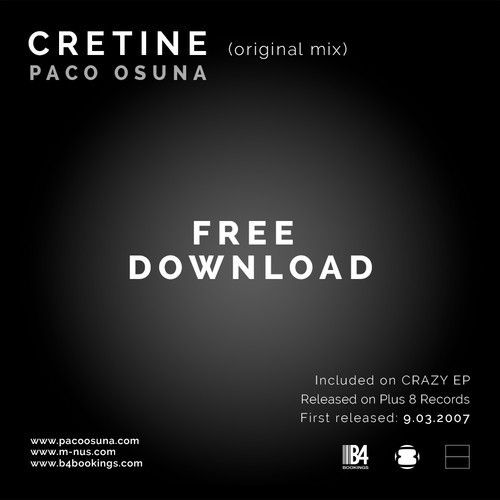 Next October 13th, Paco Osuna’s LONG PLAY will be released on MINUS. As part of the celebration of his debut LP and a career spanning over 20 years, Paco will share with his fans four tracks from various EPs, cuts that mark significant moments in his story as a producer. The first one chosen for free download is Cretine (Original mix).

“When I produced Cretine I was at a key stage in my career, a period of transition in my life. I was in a phase when I didn’t have so many gigs, one or two a week, sometimes even none – and 24 hours a day devoted to making music. All that time immersed in studio production helped me to try different resources and allowed to find myself musically.”

“Crazy EP was not my first production but it was the first LP published on a major label and in which each of the four cuts were tremendously supported. I have decided to give away Cretine because it’s a really important track in my career, it was part of my first EP for Plus8 and also represents the time when my sound as a producer began to be formed, symbolising the make-up of my musical personality.” Paco Osuna

Cretine, included on Crazy EP, was released on Plus8 in March 2007 and its four tracks made the top 10 the same month it was released. Cretine will be available for free download on Paco Osuna´s official Soundcloud for 24 hours starting at midday on Wednesday September 17th.

Stay tuned because every Wednesday until October 8th, Paco Osuna and Minus will be giving away another different cut. Enjoy!