Paul van Dyk Presents We Are One 2015 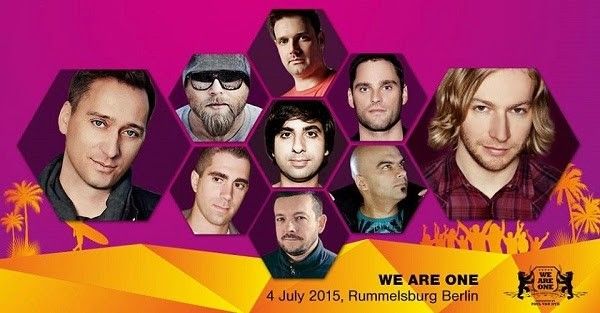 Paul van Dyk Presents We Are One 2015

The date should now be firmly marked! Paul van Dyk will drop the curtain on his fourth day-through-night We Are One music festival spectacular in Berlin this coming July 4th.

From the broad range of electronic music, PvD is today delighted to reveal the full line-up of DJs, who’ll each bring their own inimitably adventurous sound to 2015’s We Are One!

We Are One is moving to an increased capacity (and very different) location, with a fresh concept that incorporates a greatly extended Paul van Dyk set length in 2015. It also expands from 1 to 2 festival stages, allowing for more spinning stars than ever before!

Both long-established and newer VANDIT vanguards will be represented in the best possible way. Alex M.O.R.P.H. and Giuseppe Ottaviani will be ensuring that all arms remain firmly locked in the upright position, as will Paul Thomas & (returning for his second W.A.O. in a row) Chris Bekker with their debut B2B set.

A man in never-better form than when he’s on a beach, you’ll also be able to zero in on the temperately hot sounds of Paul’s ‘Louder’ collaborator Roger Shah, who completes the W.A.O. 2015 bill.

Over the course of the festival, We Are One’s master-of-ceremonies will be performing a sunset-to-sunrise set, with PvD performing over a 12-hour duration between the beach and it’s top-secret nighttime waterfront location.

With swaying palms, Tiki bars, BBQ joints and sand & water as far as the eye can see (and music as far as the ear can hear!) Rummelsburg Beach provides this year’s couldn’t-be-more-summer-like setting! On July 4th it’ll be time to create some new, very special W.A.O. memories… Early bird tickets for We Are One 2015 are on sale now. Full details and tickets availability through the links below.