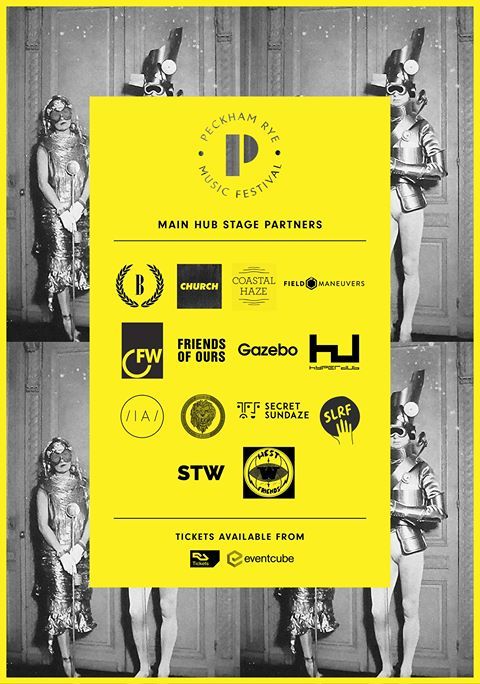 Following a fantastic inaugural event in 2016, Peckham Rye Music Festival returns bigger and better for 2017! Expanding over two weekends with new added venues and stages to the bill.

With a packed opening weekend taking place between the 12th and the 14th of May, a wealth of fringe events, workshops and talks continuing throughout the following week to the 19th May, through to the closing parties over the 19th, 20th and 21st May – this year really is set to be amazing! Bringing renowned international acts to Peckham alongside showcasing the local artists, labels and record shops that make SE!5 such as special place for music and arts.

#PRMF2017 will be made even more special with the help of a host of incredible partners. The opening weekend will welcome friends at Balamii, Field Maneuvres, Friends of Ours, Gazebo, Inverted Audio, Reggae Roots & Bass,  Secretsundaze, South London Record Fair and Stamp the Wax to the festival hub, alongside several of South London’s most exciting, forward-thinking record labels including Church, Coastal Haze, First Word, Hyperdub and West Friends.

This year’s festival hub at Copeland Park will compromise of 4 stages, both indoor and outdoor with music throughout the daytime and into the night. In addition the festival will again be partnering with Peckham’s best venues to bring as many exciting and diverse acts as possible to pack into nine days.

WHAT: Peckham Rye Music Festival 2017
WHEN: Opening weekend 12th – 14th May // Fringe events until 19th May // Closing parties 19th – 21st May
WHERE: Across 10 + of Peckham's best loved venues
PRICE: Early Bird tier tickets on sale now £25 Eventcube and Resident Advisor
CONNECT:
Twitter, Instagram and Facebook
Or by joining the mailing list on the website: http://www.peckhamryemusicfestival.co.uk