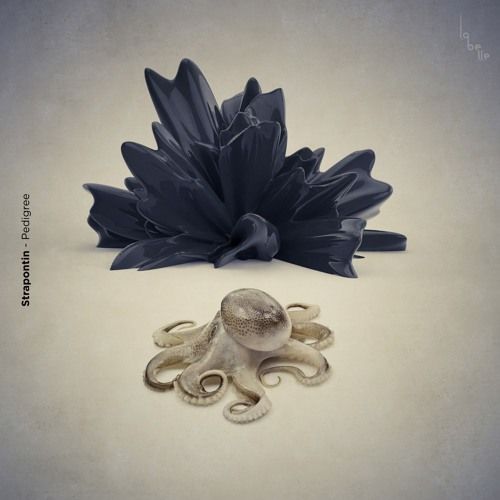 Strapontin is the moniker of Belgium based, French producer Patrick Belmont, a musical talent who arrived on the scene last year and has been builidng a solid reputation since with his personal take on the sounds of the underground. Releases on Germany’s I’m Single and a self released record, the ‘Carbon EP’ were both extremely well received and laid the groundwork for this, his debut on the ever excellent La Belle imprint.

The EP opens with the wonky, slo-mo strains of ‘Offbeat’, a spacious and hypnotic chugger that sees sweeping synths and an incessant morse code like stab pattern provide the base for some ghostly and discordant vocals. The tempo lifts for ‘It’s a Trap’ as Strapontin journeys into techier and housier territory on this floorfilling affair. Vocal contributions from Josell add to the tracks heady intensity as the record slowly builds though its six and a half minute duration, quality stuff.

Title track ‘Pedigree’ is a short but memorable exploration into the outer realms of pulsing machine made electronica. Brooding vocals, metallic hits and churning bass all combine to bring this cut to life with a real sense of menace. Penultimate offering, ‘Les Yeux de la Tete’ is a nine minute plus workout of crunchy drums, bleeps, squeaks and percussive hits peppered with obscure melodic refrains and spoken vocals. Finally we have the Golden Bug remix of opener ‘Offbeat’ which see the French remixer bring his own ethereal and melodic take on things. Live bass, heavy tape delay and swirling FX all seal the deal as this mix works its way under your skin.

This is a standout EP from Strapontin and La Belle Records and is sure to turn heads over the summer months.