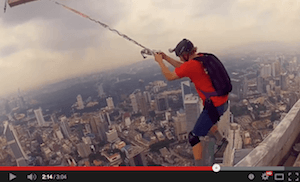 Youtube stars People Are Awesome are pleased to announce their collaboration with Alesso. The Grammy®-nominated Swedish DJ/producer Alesso’s global smash hit ‘Heroes (We Could Be)’ feat. the vocals of Tove Lo has been chosen by People Are Awesome as the soundtrack for their brand new Best Of 2014 video. The video can be seen here from the evening of Monday the 16th of December:

ABOUT PEOPLE ARE AWESOME:
People Are Awesome is a YouTube channel dedicated to those pushing the boundaries of human endeavour. They make jaw-dropping videos of people achieving the seemingly impossible. Focusing on ordinary people doing extraordinary things and proving that they are awesome.

Last year’s best of video, People Are Awesome 2013 has been watched over 125 million times and ranks in the top 40 videos ever watched across youTube.

Since then they have created a series of these videos which have all ranked #1 globally across YouTube and gained a combined view count of over 260 million to date.

ABOUT Alesso:
Alesso is a Grammy®-nominated, chart-topping Swedish DJ/producer. With over 4 million followers online, YouTube views in the millions, and fans including Sebastian Ingrosso, Calvin Harris, Pete Tong, Avicii and Swedish House Mafia, DJ/producer Alesso has a huge following thanks to his hugely popular singles, remixes and sold-out shows around the globe. His debut full-length album is set to be released in the 2015 by Virgin EMI in the UK and Def Jam Recordings In The USA