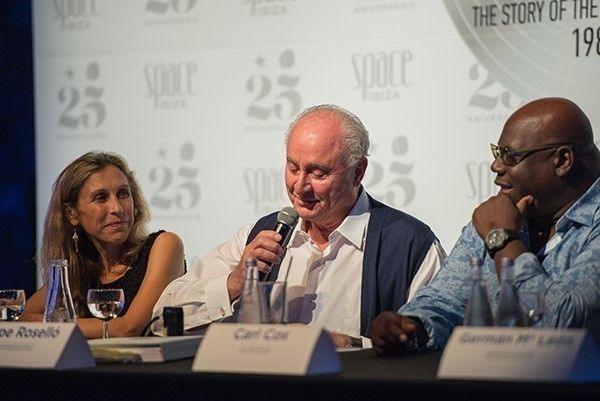 On Tuesday, September 23rd at 8:30 pm a book was presented to pay tribute to the 25th anniversary of Space Ibiza with an event at the legendary Terrace of the same club. Pepe Roselló, Ibiza founder of this Ibiza myth, was the star of the ceremony in which his great contribution to popular culture was commemorated.

’25th Anniversary Space Ibiza. The story of the best club in the world. 1989-2014.’ is a book that collects the experiences of Roselló in the initial stage of his influential career in the business of electronic music and the clubbing scene. The content of the work shows through text and image the important role played by various individuals and events on the successful model of leisure Space Ibiza and by extension, of the Pitiusas islands.

Pepe won the audience flaunting his closeness to explain some of the episodes that marked the evolution of the club and even had the grace to show his appreciation and passion to Ibiza society by offering the Consell Insular two of its trademarks ‘Ibiza Music Island’ and ‘Ibiza Music Conference’.

The presentation was led by Juan Suárez, close friend of Pepe Roselló, journalist and one of the first artists to perform at his first night business. Right after the presenter introduction, the turn was switched to honorable Mrs. Carmen, Ferrer Torres, Counselor of Tourism Ibiza, Carl Cox, Space star DJ who was celebrating in the same the end of its party ‘Music is Revolution’, Juan Oleaque, journalist and writer of the book, the honorable Vicent Serra Ferrer, President of the Consell d’Eivissa and German Ma Leon Pina, lawyer and personal friend of Roselló.

Carl Cox gave his touch of humor to the presentation by saying some expressions in Spanish and thanking Pepe for being like a father to him in Ibiza. He also spoke about how penniless he was when moving to the island and how he was embraced as an addition to the family by him. Another speaker that surprised everyone was the notary Germán Mª León Pina with discourse with historical and sociological licenses. For Mr. Germán, Pepe Roselló is one of the most important drivers of cultural change and champions of freedom of expression in Ibiza.

More than 200 guests received a welcome pack which included the 25th anniversary book, a compilation CD, a fan commemorating the event and the postcards that have been framing the communicative club thread in its silver anniversary. After the presentation, attendees were treated to a snack and a relaxed chat with officials from Space Ibiza as well as having the opportunity to take pictures with the founder and club owner, Pepe Roselló.

The bravest fell at the close of the thirteenth season of ‘Music is Revolution’ Carl Cox. As expected, the party is always in the best club in the world.