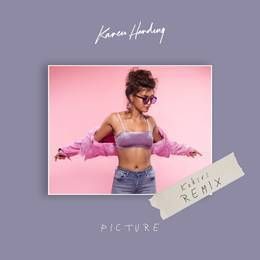 After achieving over 2.5 million streams on Spotify alone, Mistajam support on BBC Radio 1, Elton John on Beats 1, being included in a global TV advertising sync, and making a new entry at #16 in the Cool Cuts Chart last week, ‘Picture’ by Karen Harding gets remixed by Liverpudlian producer / DJ Kokiri. It marks the first official remix in a series of a credible remixes, all to be released on the Hoxton-based house label, Perfect Havoc.

Karen Harding is one busy lady. Since launching her smash Top 10 debut single ‘Say Something’ co-written and produced with Grammy-nominated wunderkind MNEK, it’s now certified PLATINUM (600,000 UK sales) and with over 18 million video views. The 25-year old Newcastle girl has been forging her own path with her stand-out style and sizeable vocal talents. She’s featured on infectious dancefloor slayers from UK producers and hitmakers Blonde and Tough Love. Karen also teamed up with hit drum & bass king Wilkinson to have a Radio 1 B-listed chart hit ‘Sweet Lies’, and worked with the legendary producer Giorgio Moroder co-writing his single ‘Good For Me’ (Casablanca USA).

This release fits fully with Perfect Havoc’s aptitude to discover the freshest talent and the biggest tunes. The independent record label and artist management company released the original of ‘Picture’ in July 2018 and it’s showing no signs of slowing down. Across its in-demand artist roster, producing crossover tracks to underground club cuts, Perfect Havoc has racked up over 80 million streams, platinum sales awards, big name remixes and releases on the likes of Kitsune, Ministry of Sound, Polydor, Toolroom, Astralwerks and more.

The Perfect Havoc star continues to rise with Kokiri hot on the remix of this latest hit with an upbeat and full-bodied vocal house version. Currently signed to dance heavyweight Armada, his story goes back to 2015 with breakthrough hit ‘Turn Back Time (Retrospect)’ on Ministry of Sound (UK) and Big Beat/Atlantic (US), which took the BBC Radio 1 airwaves by storm with plays from Annie Mac and Pete Tong. Kokiri has continued to release more A-sides, including ‘Harmony’ – a collaboration with Adam F on Danny Howard’s Nothing Else Matters imprint via RCA/Sony UK, and with Dragonette on ‘Faith In Love’. His productions have quite rightly courted a host of tastemaker champions from David Guetta, Oliver Heldens, Sam Feldt, Mistajam and Danny Howard.

As ever hotly in demand for remixes with Anne Marie & Marshmello, Jessie Ware, Naughty Boy and Craig David, Kokiri’s re-rub of Karen Harding’s ‘Picture’ is the latest to get his magical touch on the dials. Find his rework of ‘Picture’ across all download and streaming services now: https://fanlink.to/ba39