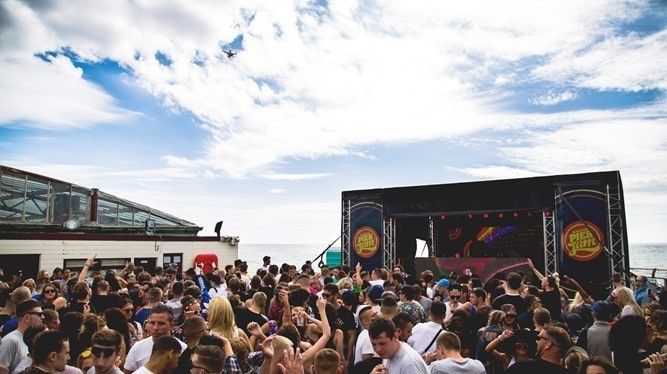 The North West’s most exciting series of daytime clubbing events, Pier Jam, will return to Blackpool North Pier on Saturday 12 September for its third massive outing. With 4 stages including the Sunset House Stage and the Terrace Garage Stage, plus indoor VIP arena, 3,500 party people will be able to soak up the sunshine, sea air and some of the best DJ talent around. Headlining Part 3 is DJ EZ, who’ll be joined by Disciples, Low Stepp, Bontan, Majestic, Camelphat, Matt Jam Lamont and MJ Cole and more, from 2pm until 11pm.

Bringing the house beats to Pier Jam on the Sunset Stage are They Don’t Know hit making trio Disciples; serial Beatport chart topper Bontan (who’s remixed for Clean Bandit and collaborated with the likes of Yousef and Sonny Fodera); Hypercolour and Dirtybird signees Friend Witin; in demand duos, CamelPhat and Leftwing & Kody, the latter whose varied style of House and Techno has earned them fans including the likes of James Zabiela, Jimmy Edgar and Huxley; and finally, Sigala who’ll no doubt spin his tune of the summer to the Pier Jam dancefloor, Easy Love.

The Terrace Stage at Pier Jam will be home to garage legends that need no introduction – DJ EZ, Matt Jam Lamont and MJ Cole. Joining them will be Simma Black Records boss and bass music star, Low Steppa; DJ / Producer Martin Ikin whose 20 year career has produced countless production aliases such as DJ Mayhem, Indigo and Soul Purpose; plus Kiss FM DJ and Producer, Majestic who broke onto the scene as a garage MC, and who is still recognised today as the best MC in the game.

Tickets for Pier Jam Part 3 start at £20 + bf  from www.pierjam.com or a VIP ticket costs £40 with perks including fast track entry, private bar, VIP toilets, free entry to the Official After Party and free event lanyard.

Pier Jam is all about quality electronic music, with the outside atmosphere and sea views creating a special kind of vibe. The first two instalments that featured the likes of Amine Edge & Dance Chris Lorenzo, MK and Tough Love, attracted 7,000 clubbers from around the UK, drawn in by the cutting-edge lineups.

For those looking for a unique all-day party vibe, head to www.pierjam.com for more info and to stay up-to-date with lineup and further events announcements as Pier Jam Part 4 will be announced later this summer.