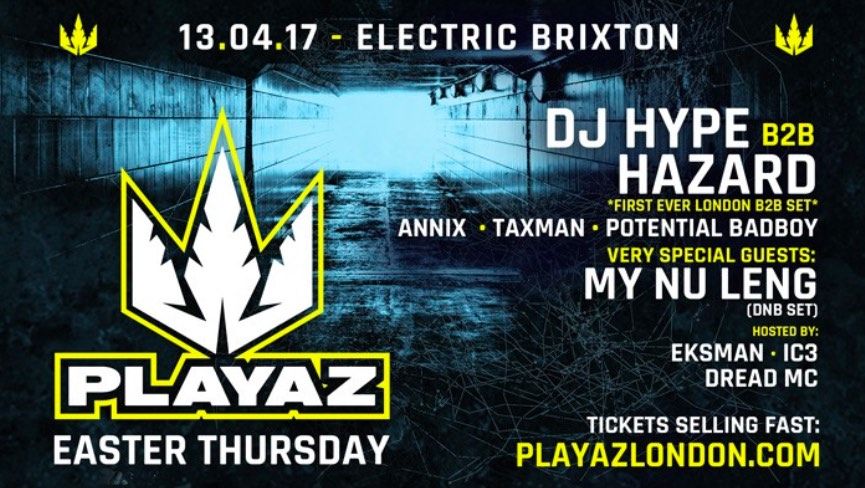 In the world of underground drum & bass there are few labels that match the significance of Playaz. Having now notched up over 150 shows that began at legendary London venue The End before relocating to the iconic super club Fabric, 2017 sees the start of a new chapter as the Playaz brand as it finds its new abode at the majestic Electric Brixton. After an unforgettable debut show at Electric in January, the Playaz family returns this Easter with a weighty line up featuring an all-star cast.

What makes this event incredibly special is that it will play host to the first ever London b2b set with Playaz legends DJs Hype & Hazard.The two Playaz bosses’ introduced the pairing to delighted fans at Boomtown last year and have since gone on to play a few select b2b sets across the UK but never before in their hometown!

Also joining the billing will be very special guests My Nu Leng. These guys are a force to be reckoned with, in short – a bass music phenomenon. They've pioneered their own signature sound from the outset with soul shaking basslines being a key ingredient to their success, so it's no wonder then that this unstoppable duo's love for bass heavy electronic stemmed from being huge fans of drum & bass music. Ahead of their SW4 festival appearance, where they will go b2b with d&b originator Goldie, they'll be performing an exclusive drum & bass set for the first time ever, exclusively at Playaz.

LINE UP:
DJ HYPE B2B DJ HAZARD *first ever London back to back set*