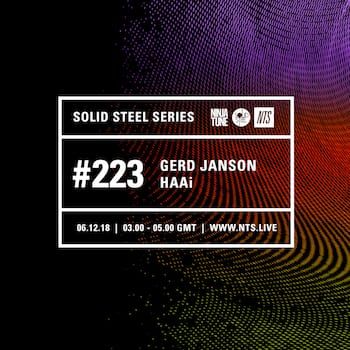 Created in 1988 by Coldcut, and broadcasting on the then pirate radio station Kiss FM, the show has gone on to be hailed as the longest running mix series in the world, broadcasting weekly shows for the past 30 years. In 2014 Ninja Tune teamed up with NTS radio to begin broadcasting a first play of the show each week. It is now ending its weekly broadcast on its three decade anniversary, although it will return in a new format in 2019.

This week, the organisation has been marking the occasion with eight new and exclusive mixes from a selection of specially chosen artists involved with the label over the years, including HAAi – outside of her monthly Worldwide FM show, this will be her first online mix since the success of her BBC Radio 1 Essential Mix back  in October.

Over the course of just over an hour, HAAi uses this opportunity to reach through every corner of her record bag. Starting with psyched-out, downtempo sounds, she moves through garage beats and dusty techno, acid stabs, evocative vocal samples and propulsive breakbeats for a mix that showcases her personal tastes without losing sight of the dancefloor.

The Solid Steel mix brings a close to a career defining year for HAAi. With her international profile growing, she released a critically acclaimed debut EP, ‘Motorik Voodoo Bush Doof Musik’, and played at a wide variety of respected festivals and clubs in the UK and abroad. Her most recent landmarks including a debut Australia and Asia tour, as well as supporting Jon Hopkins on his European tour. Due to an increasingly hectic gig schedule, HAAi finally brought her two year Phonox residency to a close in October with a sold old party at the club – the very same night her BBC Essential Mix aired.