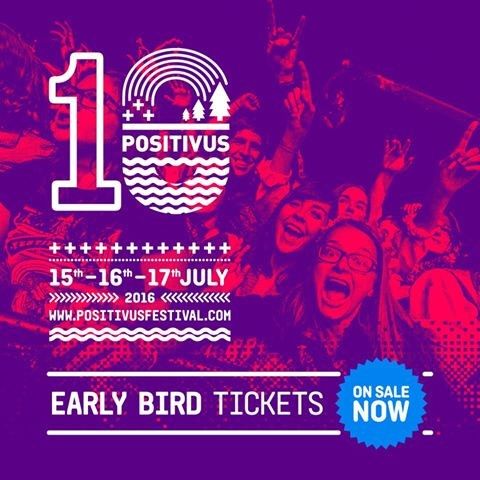 The 10th edition of Positivus Festival will take place on the 15th, 16th and 17th of July 2016. Globally renowned artists and tens of thousands of visitors from across the globe will come together for a massive celebration in Salacgriva, Latvia. In honour of the anniversary, Positivus Festival tickets will be available for a special price for 10 days only – starting from September 21st.

In its first decade, Positivus Festival has become the biggest open-air pop-music and art festival in the Baltic. With a visitor range of 30000 people annually, almost a third of its visitors arrive from abroad – Estonia, Lithuania, United Kingdom, Germany, Finland, The Netherlands and other countries.

Over the years, the festival has hosted a multitude of brilliant acts, such as Robert Plant, Muse, Kraftwerk, Sigur Rós, Ellie Goulding, Manic Street Preachers, James, Moby, Sinéad O’Connor and many other formidable global and local acts.

Positivus Festival’s excellent programme and welcoming atmosphere have generated increasing international acclaim, including regular spots in various notable festival ranking features, as well as mentions in a wide range of publications, including National Geographic, The Guardian, NME, Gaffa, Clash, and Faze Mag. The Wall Street Journal has included Positivus Festival amongst this years Top 10 Best Small Music Festivals in Europe, noting that “Hammocks strung between fairy-lit trees, lanterns illuminating vast stretches of dune, summer meadows and cooling woodland to wander in, the Baltic sea just a step away. This idyllic festival in Salacgriva on the Latvian coast is widely regarded as one of Europe’s best, with a chilled-out vibe and a lineup perfectly in tune with the let-your-hair-down atmosphere.”

Positivus Festival organiser Ģirts Majors: “A 10 year anniversary has arrived sooner than we could have imagined – we would like to organise this festival as a spectacular musical celebration for the festival’s most loyal visitors. We have plenty of ideas in mind and hopefully we can realize them all.”

“During these ten years the Positivus festival has set the quality high for festival culture in Latvia, and is among the most important events on the music stage in the Baltic States. Lattelecom is the main partner of Positivus already for three years, and with the means of technologies make the festival vibes last longer. On the anniversary year we shall take care that until the very festival day the channel 360TV would look back at the 10 years’ experience of Positivus, along with the search for new talents to get on the Positivus stage in Salacgrīva”, Juris Gulbis, chairman of the board at Lattelecom, revealing the upcoming ideas.

Tickets are available from Monday, September 21, without additional commission costs only at www.positivusfestival.com. Tickets also purchasable in all Biļešu Serviss box offices.