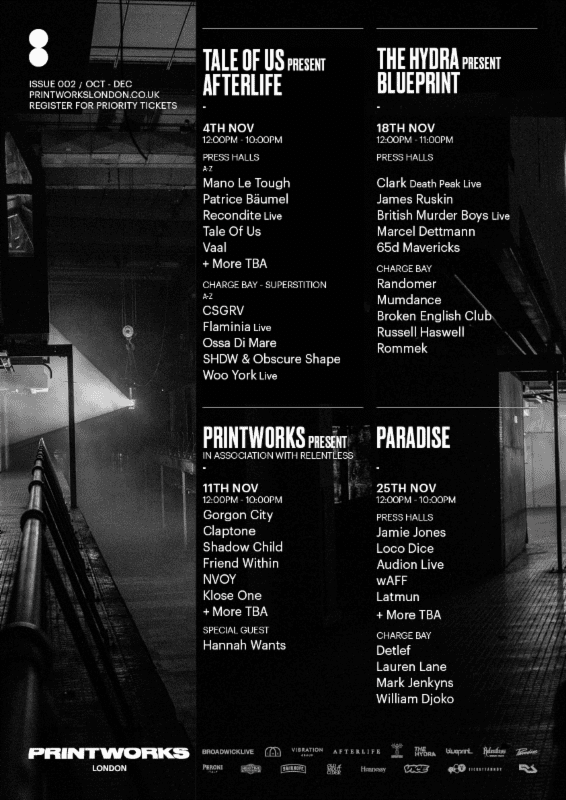 As the final throws of summer play out across the Capital, Printworks London remind us there's much to anticipate from the changing season as they reveal their November events schedule, with shows hosted by leading electronic music purveyors; Afterlife, The Hydra & Blueprint and Paradise.

November kicks-off with cutting-edge production duo Tale Of Us bringing their Berlin-based labelAfterlife to Printworks London for a special showcase. Taking the headline slot in the stunning Press Halls, Tale Of Us will be joined by a host of label stalwarts alongside respected peers with a live sets from Recondite, Flaminia and Woo York. Mano Le Tough, CSGRV, Ossa Di Mare, SHDW & Obscure Shapes, Vaal and Patrice Bäumel complete the lineup across both rooms, filling Printworks London with some of the finest techno Berlin has to offer. More acts are still to be announced.

Printworks join forces with Relentless on Saturday 11th November, presenting a lineup with some of clubland's favourites including Gorgon City, Claptone, Shadow Child, Friend Within, NVOY, Klose One and special guest Hannah Wants.

Saturday 18th welcomes The Hydra back to Printworks London as they bring their lauded Blueprint collaboration to the state-of-the-art venue. Expect some of the toughest, no-nonsense British beats from the longest running techno label in the UK. Clark will be presenting his Death Peak release live, with James Ruskin, British Murder Boys – Live, Marcel Dettmann and 65d Mavericks also on hand in the Print Halls. They'll also be joined on the day by Randomer, Mumdance, Broken English Club, Russell Haswell and Rommek.

Sign up for priority access to tickets for the November shows. General tickets for The Hydra presents Blueprint are on sale now: www.printworkslondon.co.uk