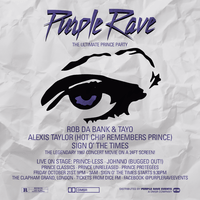 Following the untimely passing of one of the greatest musicians the world has ever known this year, Prince super-fans, Rob da Bankand Tayo, will team up for a very special Purple Rave celebration event at the Clapham Grand on Friday October 21st.

Mining their encyclopedic knowledge of the purple one’s vast back catalogue, Rob and Tayo’s Purple Rave outings have become true events in their own right since 2009. Rocking everywhere from Glastonbury to Bestival and beyond, the pair drop a booty shaking array of sing-along anthems, fat floor fillers, the deepest cuts, amazing remixes, cheeky bootlegs, and incredible cover versions to keep the party bouncing all night. A celebration of Dance, Music,Sex, Romance, it’s guaranteed to be historic and a fitting tribute to Prince.

Joining Tayo and Robby on the night will be Alexis Taylor – front-man of Hot Chip – who played a set to a huge crowd at this year’s Glastonbury under the tribute Hot Chip Remembers Prince. Expect Prince classics, Prince unreleased and Prince protégées.

Also live on stage are Prince-less who will live up to their name with an instrumental set of covers.

Purple Rave will also be screening the 1987 concert movie ‘Sign O’ The Times’ on the Grand’s 24ft wide screen! The film will be played from 9.30pm. Pretend you are in the audience, dancing to one of Prince’s finest hours (well, 90 mins). The 13 song strong film features Revolution members Sheila E and Dr Fink as well as Prince’s protégée Cat.