Aiming to pioneer a new genre of music, Matt is looking to bring about a sense of candour to the creative process – inspiring a change in the way people approach music creation. His debut release “Forgiveness”, alongside the glitchy set of visuals, is indication of this artistic endeavour – filled with glimmering synth patterns and glossy hip-hop inspired melodies.

“Forgiveness is the truth, but it’s annoying. You have to dig deep and forgive everyone that ever hurt you, and yourself”, Matt explains. “It’s really hard to be a better person, and even harder if you were only doing it to impress a girl…maybe don’t put that last part in there”.

Matt’s relationship with music has not always been a steady one. Growing up in a musical family, their constant cacophony quickly became a source of aggravation, from Broadway tunes to The Beatles. It wasn’t until he took music into his own hands and experimented with his sound that he fell in love with the craft.

We’re excited for what’s to come, tune in. 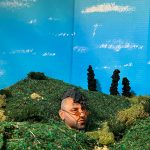