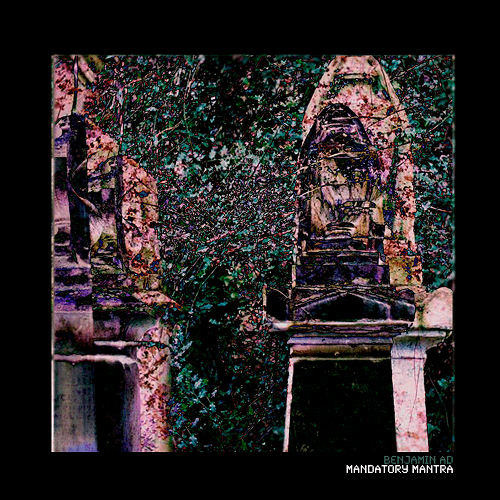 His latest release follows the poignant yet catchy ‘Come My Way’, which premiered on The 405 and had its visuals debut on Red Bull, as well as the melancholy ‘Monster’s Ball’, described as a ‘languid, down tempo return which seduces with its simplicity’ when it premiered on Clash.

The self-proclaimed ‘rhythmic philosopher’ once again opens up a direct line to his soul with ‘Mandatory Mantra’, inviting listeners to be drawn into his personal reality. In a release worthy of Kendrick Lamar himself, but with Benjamin’s unique spin, the sincere poetic rap features relatable honesty and depth of truth, expertly combined with production that drips with emotion.

The alternative hip-hop track opens with echoes of discordant piano and distorted percussion with a muffled quality that contrasts with the clarity of Benjamin’s eloquent rhymes. Each verse is laced with a little piece of his soul, woven into the tight production and poignant lyrics. The first stanza tackles his break from releasing music, which Benjamin explains is ”solely from my point of view…not wanting to quit or accept defeat, taking stock of what I have that is positive…getting rid of those demons making me blame myself for mistakes I have previously made.” The track then moves on to struggles with money and “how it can bring out the worst in people”, before taking on a deeper Noir vibe, with melancholy trumpet melodies surrounded by powerfully layered percussion. It also explores a disillusion with work whilst tackling the expectation of consistent musical releases that Benjamin describes as being like “some sort of a vending machine rather than a human that is affected by life too.” Alluding to the way that city-living can lead to a disconnection with natural beauty, the hook further references our preoccupation with work and how it can render us blind to the splendor of the outside world.

The track is accompanied by a glitchy black-and-white short-style visual, directed by Lozcast and featuring Benjamin delivering his flow in a raw and almost spoken word style, highlighting the poignancy of the lyrics as a Mantra. Incorporating hand-drawn illustrations from artist Taniel Rave, which flash across the screen to represent the demons from the track, it suggests that Benjamin is walking around in ‘an unnatural ‘live’ environment’, acting as a profound pseudo-diary entry to his world and serving to further illustrate the reality in his music.

Having already seen support from the likes of RWD and The Source, Benjamin A.D’s unique brand of poetic hip-hop, wrapped up as rhythmic philosophy, has been going from strength to strength with every release, and ‘Mandatory Mantra’ looks to be his strongest yet. Benjamin invites you to share in his reality with another piece of his soul laid bare on 18th December 2015.