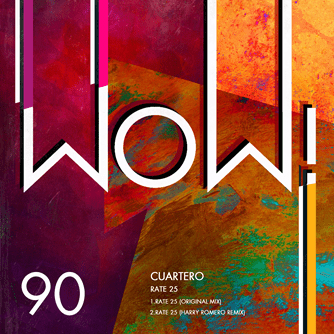 29th May sees rising Spanish DJ/producer Cuartero return to Wow! Recordings for the release of his latest single, ‘Rate 25’ – also featuring a remix from the US-based DJ/producer Harry Romero.

Cuartero is a name familiar to Wow. He first released on Mar-T’s celebrated imprint back in 2012, and since then has offered up a number of stellar tracks/remixes, as well as performing alongside Mar-T and the other Wow! Recordings compatriots at their label showcase parties.

Harry Romero’s re-rub is next up, seeing him omit some of the original’s scattered effects and replace them with a tight selection of Tech-House tones over the fierce four-to-the-floor rhythm.

‘Rate 25’ (Inc. Harry Romero Remix) is available exclusively via Beatport on May 29th and everywhere else two weeks later.