Rave in an igloo at the Smirnoff Arctic Disco at Snowbombing 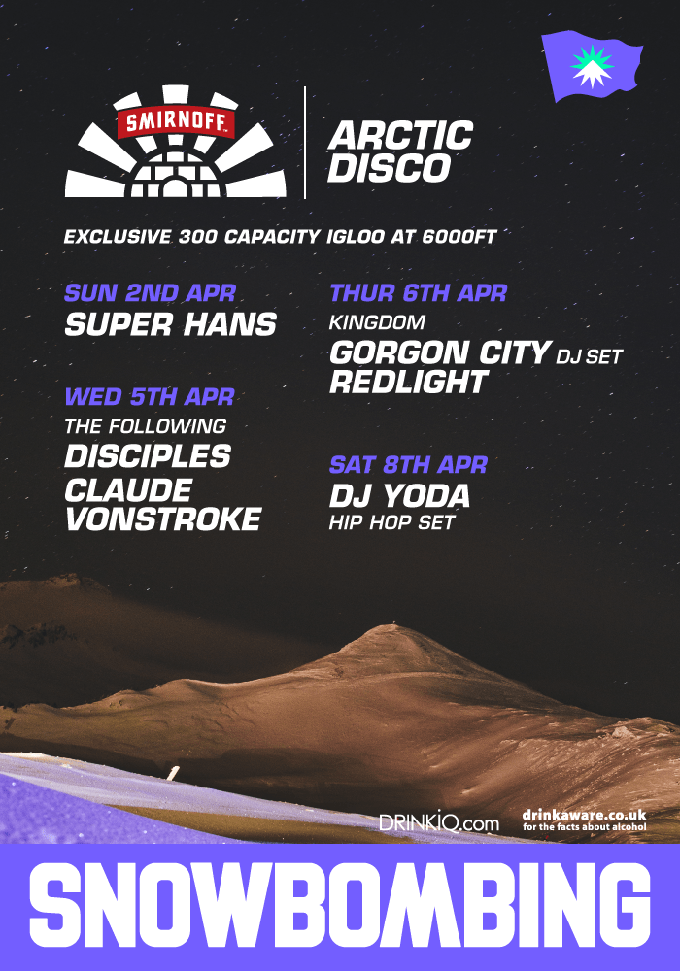 Rave in an igloo at the Smirnoff Arctic Disco at Snowbombing

Ever danced inside an igloo with the stars as your canvas and the world’s greatest DJs as your soundtrack? The Smirnoff Arctic Disco at Snowbombing festival needs to be seen to be believed. The lineups for 2017 are revealed today – choose from acts including Gorgon City, Disciples, Redlight, DJ Yoda and Super Hans!

Set atop Mayrhofen’s mighty Ahorn mountain, the Smirnoff Arctic Disco at Snowbombing is one of the world’s most unique party venues. An ice cool igloo, 6,000 feet above sea level and a destination without equal, the Smirnoff Arctic Disco plays host to a world-class selection of DJs each night, giving 300 lucky ticket holders the chance to party at the top of the world with nothing but the sky and the stars above. Previous years have seen the likes of Carl Cox, Fatboy Slim, Nina Kraviz, Skrillex, Jackmaster, Rudimental and Idris Elba grace the icy wheels of steel and 2017 is set to be another sell out affair. Tickets are on sale now to all VIP ticket holders and will go on sale from 1pm on Friday 3rd February to all other ticket holders. Take your pick from the choices below…

Opening up proceedings on Sunday 2nd April is Peep Show’s DJ supremo Super Hans. The mighty Hans' anarchic, hands in the air raveathon is perfect for The Smirnoff Arctic Disco and we couldn't be more excited to welcome this bastion of excess and hedonism to our corner of the mountains. Big beats are the best, get high all the time, as the man himself would say…

London based production trio Disciples will be bringing their club brand ‘The Following’ to The Smirnoff Arctic Disco on Wednesday 5th April. Effortlessly floating between underground dominance and mainstream success with a world conquering collaboration with Calvin Harris, the trio have formed a dedicated global fan base and The Following will see Disciples showcase themselves in ways never seen before. Joined by Dirtybird founder Claude Vonstroke who is sure to bring the party spirit.

Thursday 6th April will see Gorgon City bring their new Kingdom party to Snowbombing. With multiple chart hits to their name, including the gold-selling ’Ready For Your Love’, Gorgon City’s mix of addictive basslines and big vocal hooks will get those hands in the air at The Smirnoff Arctic Disco. Bristolian DJ and producer extraordinaire Redlight also stars.

With stunning views across the Zillertal Valley, beautiful sunsets, roaring fires, hot gluhwein, bouncing dancefloors and chill out areas complete with luxurious fur rugs, the Smirnoff Arctic Disco at Snowbombing is a truly once-in-a-lifetime experience. Tickets sell out fast so don’t miss your chance to party at one of the most iconic venues in global dance music. Tickets, priced at £46, are on sale now to all VIP ticket holders and from 1pm on Friday 3rd February for all other ticket holders at www.snowbombing.com.

“To celebrate this year’s epic festival season, Smirnoff, the world’s most popular vodka brand, is proud to be the official vodka and partner with the biggest festivals across Europe including Snowbombing, teaming up great music and great drinks to make the week one to remember." – Nicholas Cornbleet – Brand Manager Smirnoff Europe / Diageo