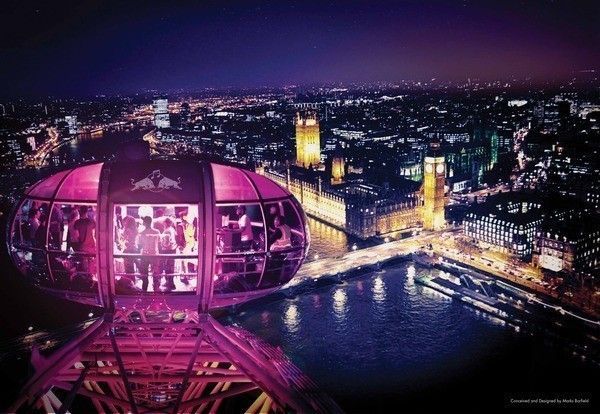 Marking it’s 15th Anniversary, Red Bull Music Academy continues to gear-up for one of the biggest celebrations of UK club culture on the EDF Energy London Eye, bringing back Red Bull Revolutions in Sound on 14th November 2013. Taking over one of the capital’s most iconic landmarks, Red Bull brings thirty of the most legendary UK club nights of past and present together for one night, each hosting their own capsule for a 360° homage to the seminal players of, and contributors to, the landscape over the past 30 years.

They join previously announced stables Bugged Out, Fabric, Shoom, The Blitz Club, Talkin’ Loud & Saying Something, Metalheadz, Motion, Sub Club, Jive Turkey and London Warehouse Events. Taking to the skies, these basements, backrooms, bars and brands are among those that helped seed the most transformative movements in dance music history. The bill of club stalwarts will be joined by online TV outfit Boiler Room which has pushed club culture to the masses via their regular stream-only parties and concept programme Channel Four House Party. To top it off, a Silent Disco on ground level sees 2000 guests able to select which capsule they would like to tune into.

As those in attendance dance through history in the skies, others can dive into the action online via the comprehensive coverage. A world first in live-streaming, all thirty capsules will be broadcast simultaneously on Channel4.com in the UK in partnership with Channel 4, and globally on Red Bull’s YouTube channel so fans across the globe can participate in this unique celebration.

A proud supporter of digital innovation, Red Bull Music Academy has teamed up with Google+ to create a living archive of club culture, set to launch imminently. A Google-powered hub for exploring clubs past and present, the Revolutions in Sound site will enable fans to upload, share and discover photos, memories and sounds to create an interactive and ever-evolving database of clubbing. More information to come very soon

Tickets on sale via www.revolutionsinsound.com from 10am Thursday 10th October. All proceeds to Wings for Life charity