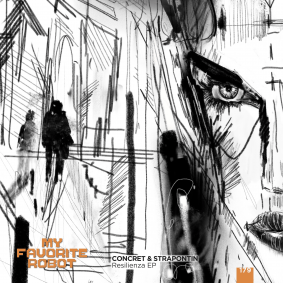 My Favorite Robot storms into 2019 with a fantastic EP from new recruits Concret & Strapontin, with remixes from Zombies in Miami, Olsvanger, Mijo and Future Feelings.

Belgian producer, visual artist and performer Strapontin brings post punk, downtempo and dark disco vibes to his music. He has released on the likes of Optimo, Nein and I’m A Cliche and is also part of various collectives as well as being a busy soundtrack composer. His singular style is showcased here on two fantastic new tracks that find him link with Trafico label boss and rising production star, Concret.

The opener ‘Abnegazione’ is a tripped out bit of cosmic deep disco. Spacious and absorbing, it has broad, painterly pads up top and more tight and menacing drums and hits below. Brilliantly muscular from start to finish, it is charismatic body music of the highest order. Remixing are the Zombies in Miami duo from Mexico, whose dark and energetic sounds come on labels like the cult Comeme. They flip it into something more uplifting, with bright hits and twinkling keys up top as the bassline chugs away beneath it all.

Next up from Concret & Strapontin is ‘Resilienza,’ seven standout minutes of cinematic music that takes you on a real audio adventure. The mid-tempo drums are deep, and whispered vocals bring real intimacy while a rugged bassline and jumbled percussion makes you want to move. It is something that pairs darkness with melodic light and as such is a truly absorbing listen.

Tel Aviv rising star Olsvanger then remixes and slows things down, zoning you out with his tense, layered up synths, sci-fi effects and another snaking bassline that takes you deep down the rabbit hole. Another Mexican producer then steps up in Mijo, with his edgy drum machines and malfunctioning sequencers. The Correspondant and Her Majesty’s Ship associate serves up a superb Ultra Dub that stays low, with corrugated bass and wonky drums making for a brilliantly off-kilter groove that’s littered with filtered and freaky voices. Last of all, Mexican Future Feelings, whose music is a recreation of space-disco, electro-funk and retro-futuristic sounds inspired by 70’s synths, reworks the track into an expansive bit of electronic music with floating drums and a lofty groove that is coloured with intergalactic pads.

This is a brilliantly inventive package that rewires disco from a bunch of totally new perspectives.