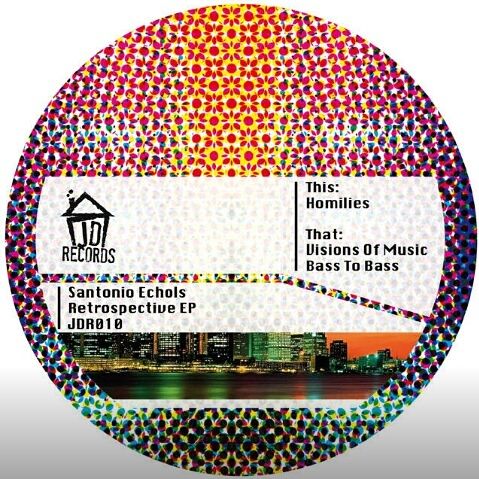 Following the release of three stellar projects – ‘Soul Invasion’, a remix of God Of The Machine’s ‘Warpaint’ and ‘Jazz Intrusion’, Santonio Echols is now following up with another top-notch project by the name of ‘Retrospective EP’. Out on Vinly on the 28th of October, 2015, ‘Retrospective EP’ is seeking to add more weight to Santonio Echols’ rich catalogue and continue his streak of outstanding, hit productions.

Hailing from Detroit, Santonio Echols is one of the finest producers to come out of his hometown in the 80s and he’s established himself as an international ambassador for Detroit style Techno and House. With over 28 years of experience in the electronic music business, Santonio Echols has inked deals with some of the world’s most renowned labels, including the likes of: Tresor, Detroit Dancer, London FFrr, KMS, Decks Tracks, Opilec Music, React Records, Serious Grooves, D Records, Soiree Records, Random Noise Recordings, M.I.D Records, Express Records, Siren, Chapter 2 Recordings and Jambalay Records amongst others.

‘Retrospective EP’ holds three enticing tracks – ‘Homilies’, ‘Visions Of Music’ and ‘Bass To Bass’. First up, ‘Homilies’ puts Santonio Echols’ House flavours in full display with an infectious groove, soulful, rhythmic vocals and intricate piano arrangements. On the other hand ‘Visions Of Music’ puts through a more uplifting vibe, with a slightly faster tempo, a 16th feel groove and humming vocals that truly blend well to create a banging effort. Last but not least, ‘Bass To Bass’ showcases the deeper end of Santonio Echols’ flavours. A funky synth arrangement melds together with a traditional House style beat whilst building up towards a subby segment which gives this production a truly unique feel.