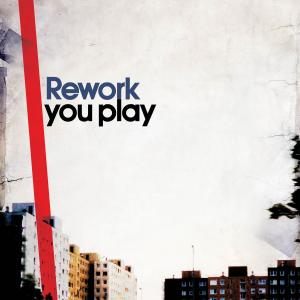 Visionquest welcome  talented  production trio Rework  onto  the label with ‘You Play’, an album of eleven crisp and wonderfully rich tracks combining elegant rhythms with snappy vocals that blurs the distinction between the underground elite and modern popular culture.

Rework are two German boys and a girl from a punk band background. Their ‘You Play’album has a rock n roll attitude to the dancefloor, spiced up with French and English lyrics about the ramblings of that crazy little thing called love.

Following critically acclaimed work on the much ­esteemed Playhouse imprint, their third album signifies a change in intensity for Rework’s Anglo­French funk antics, adding a dash of dancefloor melancholy. Rework understand how music works for the dancefloor with key tracks  such  as  ‘Flowers  and Girlfriends’  and  title  track  ‘You  Play’ cut for serious musicheads,  while  the  futuristic  melodies  of  Rework’s  ‘Perfect  Gun’  have  a  new­wave  feel reaching into sublime pop territory.

More  recently their accolades  include  releases on Magda’s  Items & Things  and  the Parisian label Meant records, and they are currently collaborating with Jennifer Cardini, Seth Troxler (with a release penned for his new label this Spring also) and many others.

Aside from producing their own music, Rework have done remixes for the likes of AlterEgo, Chloe, Magda, Losoul and Trentemoller and have launched their own record label Loveyeah early in 2014.

Interested in all elements of creativity, REWORK have also collaborated in a fashion filmtrilogy, “The Copenhagen Experience” by Mads Nørgaard with a cover of the Danish punk­hymn “Copenhagen”, remixed  by  Trentemoller. The film features super model Freja Beha Erichsenand Rework live at the Copenhagen fashion week.

The Visionquest imprint was launched in 2011 by the freshest wave of new producers to emerge from Detroit in a decade, Seth  Troxler,  Ryan Crosson, Shaun Reeves and Lee Curtis. Reflecting their diverse outlook, and free from the constraints of  genre­specifics, the record label is a home for friends, newcomers and established artists alike and one of the most talked about imprints of recent times. Visionquest has delivered exciting early music from Benoit & Sergio, Maceo Plex, Tale Of Us, Guy Gerber as well as albums from the undiscovered talents of Footprintz, Dinky, Wareika and Crosson & Merveille, proving the four have never been scared to take exciting chances with  their A&R choices. Events in WMC Miami, fabric in London andDC10 in Ibiza plus their daring Visionquest Thirteen series illustrate their desire to step outsidethe norm and be adventurous in every factor of their activities.