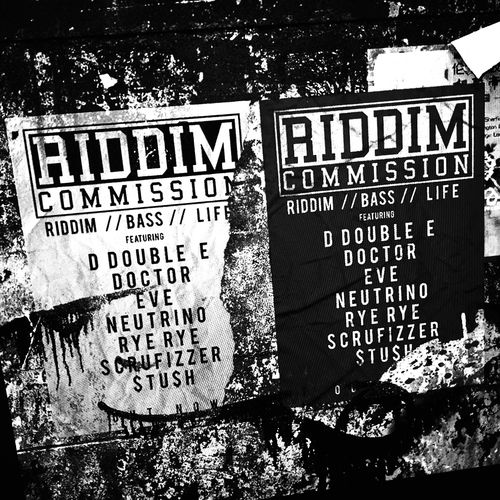 UK production outfit Riddim Commission drop their debut album Riddim.Bass.Life. this May: a highly original mix of house, garage and grime and the fullest expression yet of a sound they helped to pioneer.

With supporters including Annie Mac, DJ Target and Skream, their tracks make regular appearances on both the airwaves of Radio 1 and in clubs around the world, while over the past few years the duo have been called upon to stamp their unique sound on remixes for the likes of Drake, Example, Iggy Azalea, DJ Fresh, Bobby Shmurda and Rae Sremmurd.

Riddim Commission's modus operandi has always been about pushing boundaries. With backgrounds in house, grime, hip-hop and beyond, the duo were one of the first to fuse house music production with grime vocals, creating a entirely original, hard-hitting club tracks that have earned them a place in the UK's musical history.

"If you look at everything we've done its always been about putting together the most interesting combination of beats and features so we have a style and sound that is truly our own. With our production we always try to be forward thinking and pack it with energy to make people move." Riddim Commission

Riddim.Bass.Life. is a 12 track collection that demonstrates the duo's innate ability to bring together sounds and techniques from these different musical scenes, with devastating results.

Present of course are the sinuous, heavy-duty basslines for which the duo are rightly known, but it is the sheer calibre of featured artists included that really sets Riddim.Bass.Life. apart. From the Baltimore drawl of Rye Rye, bashment vibes of Stush and the unmistakeable vocals of Eve, to the East London swagger of D Double E, Riddim Commission have pulled in some of the world's finest vocalist, all of whom add their own unique flavours to the album.

The strongest cut on the LP though is arguably the immense 'Cut Some Shapes', released as the album's first single and featuring vocals from Scrufizzer and garage legend Neutrino.

"I think that 'Cut Some Shapes' is indicative of our approach to the entire album. We could have done a Grime record with Scrufizzer, we could have done a garage record with Neutrino, but what's the point, they've already been done. The beats are the soundbed that put the features in a new and exciting environment where they can be seen in a different light.

"We have everyone on the album from double Grammy award winning Eve to grime legend D Double E to the queen of dancehall $tush to garage legend MC Neat. It's about working with artists we massively respect and creating something new together." Riddim Commission

Riddim.Bass.Life. is out 19 May on Bullet Train Records