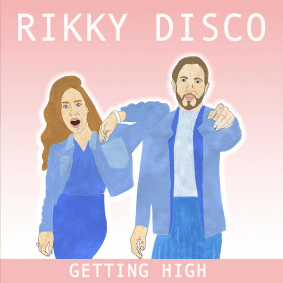 Bearfunk welcome Swedish duo Rikky Disco for a debut single of delightful disco, backed with remixes from Kim & Buran, Ichisan and One Era.

Rikky Disco was born during the summer of 2018 when Chris Tall & Fanacy met through their mutual manager Rikky. They both liked him so much that they named their band after him. Chris Tall from Stockholm is a disco fanatic who selected his artist name based on his notable height. Chris is a time traveller and delights in manoeuvres throughout time and space, to dig out cherished dance music memories, blending them with today’s rhythms, making honest, bouncy and darn right funky music. The other half of Rikky Disco is Fanacy who coined her artist name based on an expression that she made up which refers to the drives in her creative universe: “FANACY: A feeling of unbridled thirst for passion, flow and fantasy. A state in which the being seems to be engulfed in a whirlpool of lust”. Fanacy is also Swedish, but spends a lot of her time writing in France, a place she loves. She also loves French disco vibes, which via osmosis have been deeply embedded into her sound.

‘Getting High’ is the debut single from Rikky Disco. A long-awaited and uplifting Nu- Disco track which is positively awash with waves of groove and euphoria. The track is rich with swing and rhythm and boasts a flow that is almost impossible not to tap your toes to. Big rolling pianos, snappy drums and catchy hook lines are the order of the day. Lining up on the remix tip is a global cadre of fine operators. First up from Russia is Kim and Buran who contribute two versions. First up is their angular and synthy ‘Electrohigh’ version, whilst their ‘Discohigh’ mix slows the pace down a tad, bringing in an elastic bass guitar groove and some laid-back, disco sensibility.

Next up is Slovenian based Ichisan who breaks out the analog synths with his dance- floor, electronic stomper. One Era breaks down into the funk with his re-work, using snaking keyboard lines and bass guitar parts to superb effect.

Stay tuned for more Rikky Disco coming soon to discotheque near you.