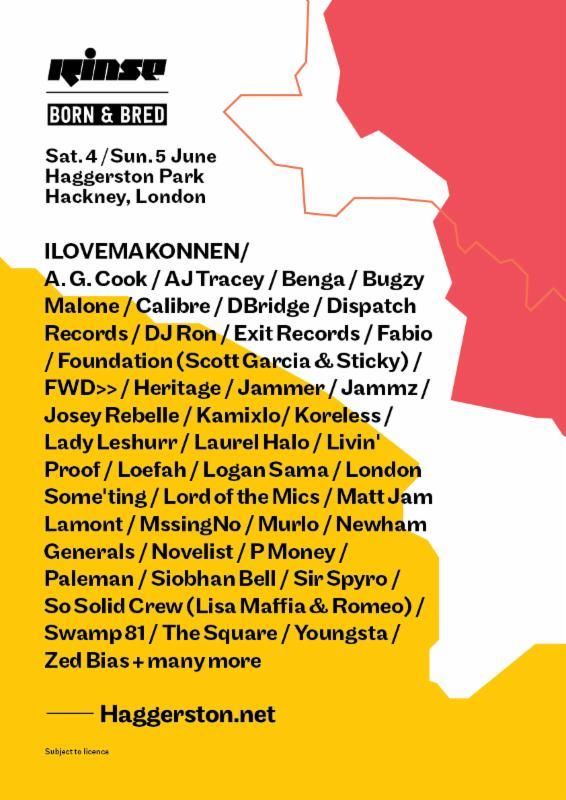 Still focused on championing the vital present and future sounds of London, this year's festival returns to Shoreditch's Haggerston Park for a full two-day weekender on Saturday 4th and Sunday 5th June. Fitting the expanded format it's set to be even bigger, bringing together names from across the capital and beyond including Newham Generals, iLoveMakonnen, Benga, The Square, Geko, A.G. Cook, Loefah, dBridge, Laurel Halo, Sam Supplier, Josey Rebelle, Kamixlo, Murlo and more, with many more to be announced in the coming months.

For the last three decades London's collision of rave-inspired dance music and soundsystem culture has acted as a flashpoint for a succession of hugely influential sounds: from dub, jungle and drum 'n' bass to garage, dubstep, grime, house and beyond. Found Series established 2015's first Born & Bred Festival with the intention of celebrating that living history and the people involved in making it. So co-hosting this second edition with Rinse makes perfect sense – Rinse FM's broadcasts, parties and record labels have fostered many defining artists and formed the heartbeat of the city's dance music underground for over 20 years.

Rinse and Born & Bred will be hosting many of those artists for whom Rinse provided a vital early platform. Headlining are Newham Generals, the legendary duo of D Double E and Footsie whose peerless music and fiercely independent attitude has made them a huge influence on subsequent generations of grime MCs and DJs, including South London young guns The Square, who are also on the bill. Grime's current rude health is reflected throughout the weekend's line-up, which also features veteran virtuoso DJ Sir Spyro, Boxed's Mr. Mitch and Logos, Murlo and Mssingno. Rinse is also equally famed for its role in the evolution of dubstep, represented at the festival by two of it's pioneers, Benga and Youngsta.

Yet Rinse and Born & Bred 2016's line-up also stretches beyond its home city to recognise the truly global reach of London's influence. Also headlining is Atlanta rap star ILoveMakonnen, who last year followed up his huge Drake collaboration 'Tuesday' with his acclaimed ILOVEMAKONNEN 2 mixtape. Elsewhere on the line-up are other artists who've drawn influence from the mutant DNA of UK bass-driven music and woven it into striking new shapes. They include uncompromising US-born, Berlin-based club explorer Lotic, and Laurel Halo, whose wild rhythmic excursions have emerged through labels including Hyperdub and Honest Jon's.

Rinse has always been defined by its ear-to-the-ground attitude, through providing a platform for those young artists whose visions are reshaping UK dance music in the present. So facing the future are the new hybrid club music innovators on the bill, including PC Music founder A.G. Cook, one of the minds behind the mindbending pop of 'Hey QT', Bristol techno shapeshifter Hodge, and the whirlwind blends of Kamixlo  and Lexxi, two of the DJs behind London's renowned Endless parties.

Rinse and Born & Bred will take place at Haggerston Park, Shoreditch, on Saturday 4th and Sunday 5th June 2016. Many more names are set to be announced in the coming months, from both the Rinse family and beyond.