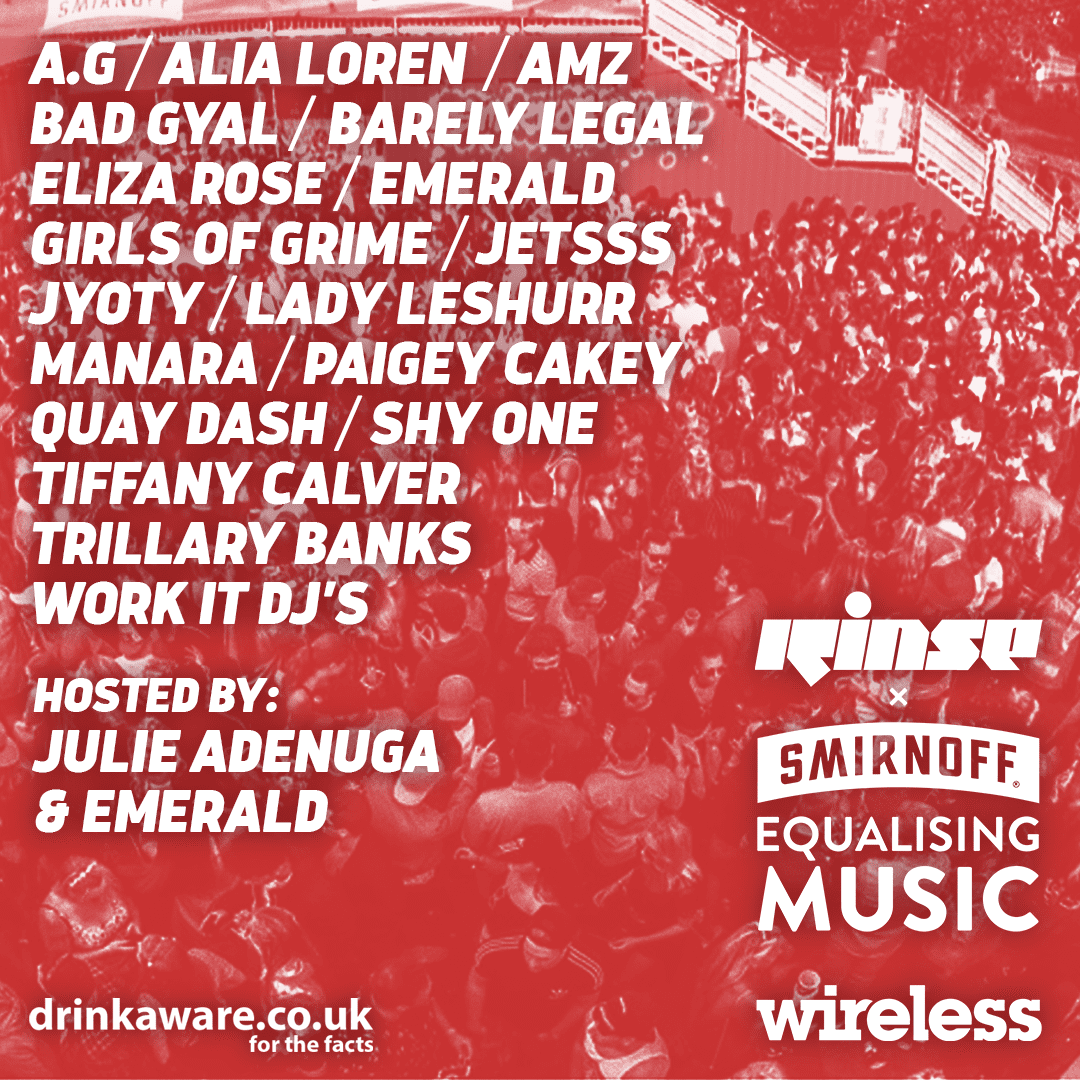 Now in its second year, SMIRNOFF Equalising Music is a 3-year, global initiative to escalate gender parity in the music industry by 2020 and redress the gender imbalance on club and festival lineups. We all know the disparity is real – FACTS, a bi-annual study of festival lineups across the UK and Europe by Female:Pressure, showed that in 2017 women still only accounted for 19% of festival headliners. Smirnoff Equalising Music is an initiative designed to effect real, top-down, industry-wide change.

The latest move is perhaps the boldest yet, coming in direct response to the controversy surrounding the 2018 lineup of Wireless – London’s leading urban music festival. When the line up was revealed earlier this year, despite tickets selling out in 24 hours, many highlighted the lack of women on the line up. Wireless approached many more women to perform than appeared on the final lineup – and they continue to work towards diversity through campaigns such as Festival Republic’s ReBalance initiative and Live Nation’s Women Nation Fund. But nevertheless, the story was a springboard for a vital discussion. Why should it be so hard to populate a festival lineup with women in hip-hop, grime, and R&B? Why do we so rarely see women represented in urban music on the highest level?

Rinse began life as a pirate radio station in 1994 spearheading UK urban music scenes such as Grime and Dubstep by providing the breeding ground for innovation in the late ‘90s and early ‘00s. Broadcasting on FM, DAB and online worldwide, Rinse champions the stars of tomorrow and is recognised for discovering and nurturing radio’s freshest and most influential female talent – so it’s only right that Rinse curates the line-up for Smirnoff House at Wireless 2018.

Plus, across the three days, London DJs A.G, Alia Loren, Amz, Barely Legal, Eliza Rose, Girls of Grime, Jetsss, Jyoty, Manara, Shy One and Tiffany Calver will all bring breakneck sets of grime, garage, and cutting-edge club sounds, taking the pulse of London’s nightlife and bringing it to the heart of Wireless.

“Smirnoff set up Equalising in Music in 2017 because the music industry had been sidelining female talent for too long. And we’re continuing to put our money where our mouth is. This is about giving under-represented talent a platform, inspiring the next generation of women headliners and influencing the industry to enable genuine, long-lasting change. This year at Wireless, we’re partnering with Rinse FM to curate our Smirnoff House lineup with the best in female talent to make a difference where it matters the most. Rinse FM helped create the genres that are thriving at Wireless and have many female success stories – some of which will be bringing the good times to the Smirnoff House." – Sam Salameh, Head of Smirnoff

“Since its pirate beginnings, Rinse has been nurturing talent and pushing boundaries.  Thanks in no small part to the likes of Julie Adenuga, Maya Jama and Emerald, female presenters have inspired and influenced our entire radio output.  It’s fitting to be teaming up with Smirnoff Equalising Music and Wireless to celebrate a wealth of diverse female talent and promote a shift in urban culture" – Sarah Lockhart, Rinse

Tune in to Rinse drive time (1600-1900 hrs) to hear a week of special Equalising Music programming kicking off 9th July, plus 12 hours of highlights from Wireless on Saturday 14th July. To find out more and for the chance to win tickets to Wireless Festival 2018 visit rinse.fm/equalisingmusic.