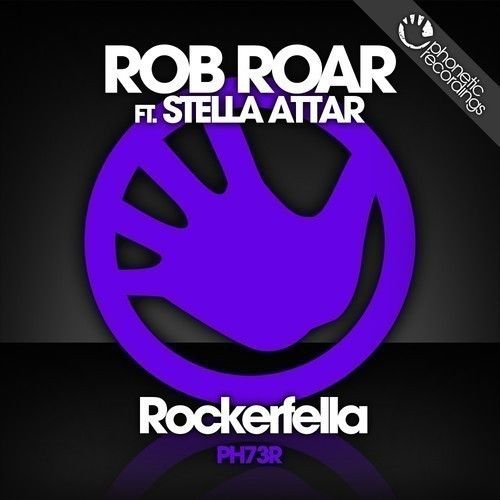 Phonetic are proud to present remixes and a new vocal version of ‘Rockerfella’. The original Terrace Attack mix became a firm favourite on the white island of Ibiza. The instrumental Terrace Attack mix hit No.1 in the USA House charts, knocking Calvin Harris off the top spot. The track also hit No.1 in the Canadian House Chart and featured in the Music Week Coolcuts, stormed to No.4 in the prestigious DMC Buzz Chart “What summer house is all about, big smiles and raised arms across the floor.”

Here Rob teams up with the Fabulous Stella Attar, known for her work with Luke Solomun, the had worldwide success under their ‘The Freaks’ moniker. They stormed charts with the global hit record ‘Creeps – Get on the dancefloor’ (DATA/MOS).

Rob Roar’s sound has seen him DJ in all four corners of the world with tours of Asia, USA, Europe & Australia all under his belt. He has firmly stamped his mark on the House Music scene as we know it and is responsible for many a No.1 record and Ibiza Anthem, a selection of which under his under his Max Linen guise alongside Leiam Sullivan. His productions have hit No.1 in the Global Radio Chart, featured at the top of the DMC Ibiza & Miami Buzz Charts and high in Beatport’s Tech House Chart. Rob’s new ‘What’s Happening?’ single featuring the Grammy Award winning Keithen Carter recently hit No.3 DMC Buzz Chart “What’s Happening? The Phonetic boss is happening! Massive tune from the Guvnor”:

Rob has been lucky enough to perform at all of the Ibiza Super-clubs. His much talked about sets have seen him headline the legendary Sunset Terraza Arena for We Love Space on Sundays. His productions have seen him record in the studio with Sir Tom Jones & Boy George respectively, host his own show on Ministry of Sound Radio and release his press hailed ‘Compilation of the Month’ Ibiza Night & Day Album series. Watch out for the new album coming in September.

First up on this new package, Rob delivers his deeper 3AM mix road tested on the Space Terrace to a devastating effect. Remixes come courtesy of Phonetic’s new protege Jay Robinson with RELOAD toughening things up. The ‘Smoke You Out Vocal Mix’ showcases Stella’s unique talent, a prolific songwriter and performer. Last but certainly not least the Radio Edit, jazzed up a tad for those peak time Radio Shows.