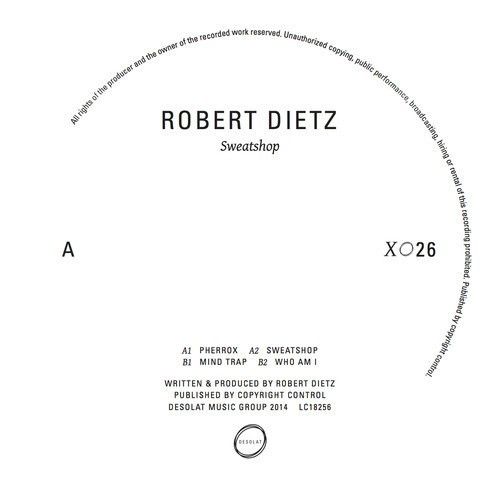 Robert Dietz has been one of the most consistent producers around in recent years, with releases on a diverse assortment of labels including Cecille, Cadenza, Running Back and Saved Records. While Robert’s ‘Your So Hood’ track featured on the Desolat X Sampler back in March, then this will be his long-awaited debut solo release on Desolat, and as one would expect from such a talented producer it is a striking EP.

‘Pherrox’ kicks the EP off in startling style. The track has a brooding tone and trudges along, characterised by a sharp beat and a dark distorted vocal, with computerised stabs piercing the soundscape. ‘Sweatshop’ follows in a different vein and builds, with punchy hi-hats, acid bass, spoken word samples, a panning siren combining brilliantly and resulting in a medley of hedonistic vibes.

Next up is ‘Who Am I’, which takes a techier-tangent and sees an off-kilter beat, another gloriously manipulated vocal, and percussion spirals  effortlessly merge on this mechanical monster. Rounding things up is ‘Mind Trap’, which is another robotic mutation featuring a disfigured vocal, electronic squelches, and swirling pulses of bass.