Roger Sanchez to play Glitterbox at Ministry of Sound 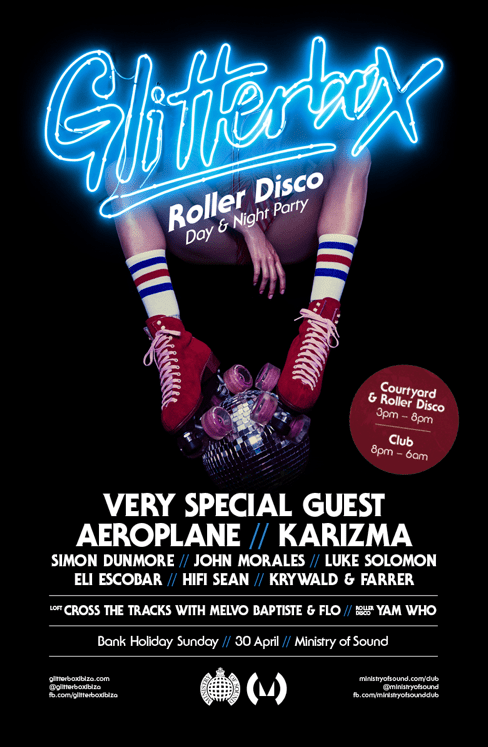 Roger Sanchez to play Glitterbox at Ministry of Sound

After the overwhelming success of last August’s day and night party, the full Glitterbox roller disco experience returns to Ministry Of Sound on 30th April, with headliners and house music greats Roger Sanchez, Aeroplane and Karizma.

A Glitterbox favourite, Roger Sanchez is one of the busiest characters in house music. He’ll return to London following two sold out shows for Percolate and at Camden’s Koko, plus his recent UNDR THE RADR parties in Miami. His labels Stealth and UNDR THE RADR continue to thrive, releasing his own music as Roger Sanchez and under his S-Man alias alongside house producers and collaborators handpicked by Roger. His radio show is broadcast on 82 stations around the world to over 3 million monthly listeners.

Taking full advantage of the May Bank Holiday with an all-day, all-night extravaganza, Ministry will open an outdoor stage during the day for the likes of Simon Dunmore, Luke Solomon, Eli Escobar and John Morales. Percolate residents and disco elite Krywald & Farrer and London’s Savage resident Hifi Sean are also set to play, while Yam Who will soundtrack the roller disco in Ministry’s Box room. Later, rare grooves, soul funk and disco will be playing all night in the Loft courtesy of Baptiste and Flo, while the headliners head to the main room to take the night away.

The well-loved stars of the show, the Glitterbox dancers, will be performing and joining the crowd to dance throughout the party, while the street food trucks and photo booth that were so popular at last year’s event will make their return.

Just like the Glitterbox albums, the parties’ soundtrack is a well-crafted blend of obscure and sought-after disco and house collectables alongside classic anthems – records that have defined and influenced the scene for over 30 years. For a flavour of what to expect from the DJs, the latest album Glitterbox – Love Is The Message is available now to download and stream: http://smarturl.it/gblitm.

For its fourth season in Ibiza, Glitterbox will take over Fridays at brand new club, Hï Ibiza, every week from 9 June (except 4 August). Glitterbox will be breaking in the club with mind-blowing state-of-the-art production, bigger line-ups and their now infamous dance crews out in force.

2016 saw Glitterbox come of age in Ibiza and the UK. The parties at Space, Ibiza drew tens of thousands of clubbers across 17 weeks, encapsulating the hedonistic spirit of the legendary venue during its final season. Alongside two roadblocked events at Ministry of Sound, Glitterbox also presented stages at We Are FSTVL and Defected Croatia – two festivals to which Glitterbox returns this summer, alongside a 2017 debut at Liverpool Disco Festival.