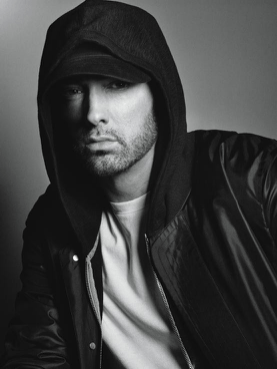 Chart-topping icon
With record sales exceeding 172 million copies, the 45-year-old rapper is by far the bestselling rapper of all time.

He has penned hits such as Stan, The Real Slim Shady, Without Me, My Name Is, Cleanin’ Out My Closet and Love The Way You Lie. With Lose Yourself from the partially autobiographical film 8 Mile he also became the first rapper to take home an Academy Award.

Eminem has been called one of the greatest MCs of any generation. Eminem broke through with The Slim Shady LP in 1999, and subsequent releases The Marshall Mathers LP and The Eminem Show are now hip-hop classics.

His latest, ninth album Revival entered the Billboard chart at number one, making him the only artist to have eight albums in a row debuting at the top of the chart. The album also hit number one in the UK as his eighth consecutive number one album, equalling a record set by Led Zeppelin and Abba.

Head of programme Anders Wahrén says:
“Eminem is one of the biggest artists of his generation, and we are absolutely thrilled to finally get him to Denmark. We have wanted him at Roskilde Festival for so many years, and I must admit I almost shed a tear of joy when I got the confirmation.”

“Eminem’s importance can’t be overstated. More than anyone else, he has brought hip-hop to new audiences. His Reading show last year served as proof that he can conquer a festival crowd, and we can’t wait to see him on our iconic Orange Stage.”

Diversity and non-profit
Eminem will join a diverse group of artists from all over the world, including superstars Bruno Mars, Gorillaz and David Byrne, performing at the Danish non-profit festival. Many more acts will be announced in the coming months.

Dating back to 1971, Roskilde is one of the oldest major festivals in the world. As the largest in Northern Europe, it has come to be known as the mother of all festivals, offering 175 music acts, cutting-edge art, award-winning food and a green profile.

Roskilde Festival received the Health and Safety Innovation and the Take A Stand awards at the European Festival Awards earlier this month. On top of that, the environmental organisation A Greener Festival has awarded Roskilde for its ambitious environmental initiatives.

With more than 175 music acts in the line-up performing on eight stages and over 100,000 passionate music lovers gathered for a full week, Roskilde Festival is among the most unique music festival experiences in the world. A position the festival has held since the early 1970s.