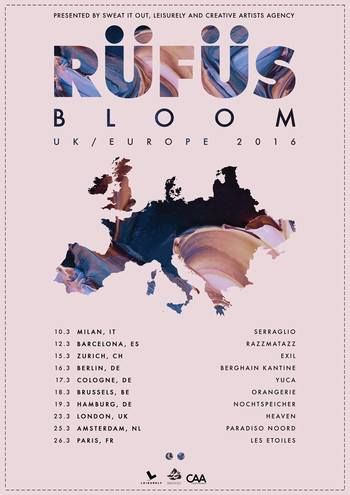 Sydney experimental dance trio RÜFÜS have announced a run of headline European dates this Spring, which sees them perform at London's Heaven on 23rd March. The tour will support the band's forthcoming album release; 'Bloom', which comes out 22nd January on Columbia Records.

In addition to the tour news, the band have also shared the latest single to be taken from their second album; 'Say A Prayer For Me', which is out now on Odesza's label Foreign Family Collective. It follows previously released tracks 'Innerbloom', 'Like An Animal' and 'You Were Right', all of which charted at #1 on Hype Machine's Popular Tracks chart.

RÜFÜS' debut album charted at #1 in the Australian Official Album Chart and has reached Platinum status. They also recently picked up the prize for Best Dance Release at the 2015 ARIA Awards (Australia's equivalent of BRIT Awards).