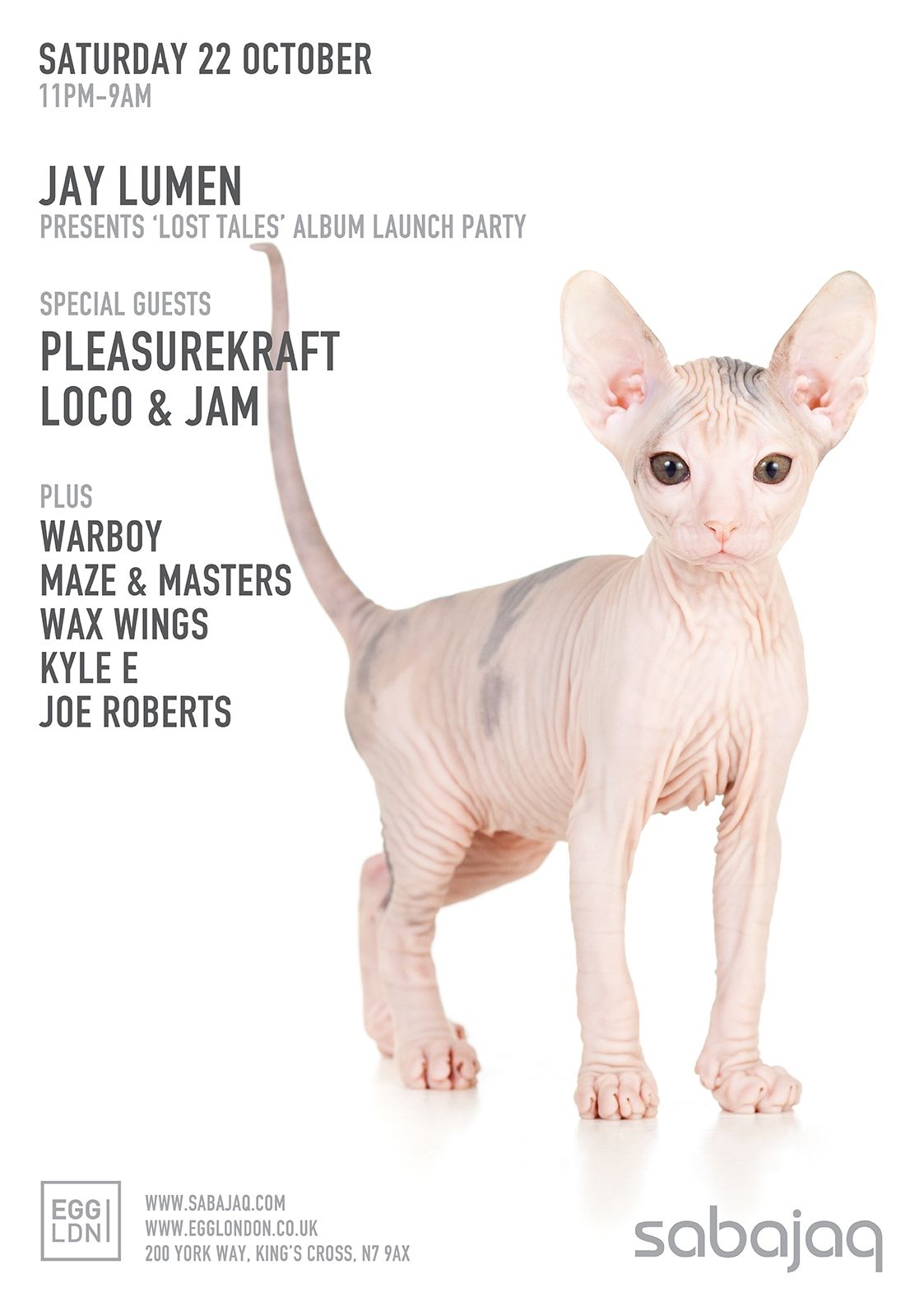 Master of the dark arts, bi-monthly party Sabajaq returns in October with a trio of techno heavyweights heading up the main room.

Launching his debut 'Lost Tales' album
via his own Footwork Imprint, Jay Lumen brings a taste of the studio skills that have seen his tracks snapped up by the likes of Drumcode, Saved and 100% Pure. With 'Lost Tales' road tested on his travels between Miami, Amsterdam, Detroit, Barcelona and Toronto, tracks such as the panel-beating 'Passion 303' or the soaring, emotional synth-lines of 'Azure' can be experienced in their full richness on Egg's custom built Flipside soundsystem.

Returning after mesmerising the Terrace in February, Pleasurekraft made good on their promise of bringing 'Fireworks, pasties and sharks with laser beams,' or at least delivered the musical equivalent. With a bag of dance floor dynamite that stretches from breakout smash 'Tarantula' to their latest techno dominator on Drumcode, the nervy 'Dopefiend', as well as the offspring of own Kraftek label, expect a similarly spectacular show on this return.

Also back by popular demand are Irish duo Loco & Jam. The Northern Irish duo have moved unceasingly through the ranks since the fierce bass fury of 'Medusa', their 2010 techno anthem which stayed in the Beatport Techno Chart for two months. Most recently found remixing the legendary Green Velvet, alongside Kydus and Glasgow Underground boss Kevin McKay, their latest EPs for Transmit Recordings and Christian Smith's Tronic follow high profile releases on Trapez, Unity Records, Stereo Production, Toolroom Trax and more.

In room two, Sabajaq mastermind and resident DJ Jim Warboy is joined by fellow resident Joe Roberts and three special guests. After spending the summer in Ibiza, manning the decks of Solid Groove's Ibiza Sonica show and playing at Privilege, Space and Mambo, Maze & Masters arrive back in the UK with a complete knowledge of this season's biggest house hits. They're joined by Wax Wings, the exciting new London artist fresh back from a Japanese tour with Maya-Jane Coles.

Performing on the night will also be iconic voguer Benjamin Milan, who has worked with Madonna and FKA Twigs.