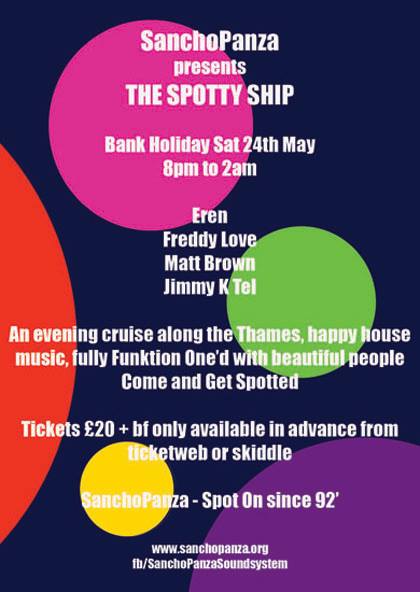 Sancho Panza return after their successful full moon boat party in October last year, and 20 years milestone celebrations across the capital. In true Sancho style they continue with their themed events, kicking off the series for this year with a spotty ship theme, up and down the Thames for the bank holiday cruise. Sea Captains: Jimmy K Tel and Matt Brown (Sancho Panza) will be joined by their favourite Skippers: “Freddy Love” and “Eren” who will keep the music and crew in ship shape on the sea shore.

France’s house import, Freddy Love is a music pioneer and compadre of Laurent Garnier, both of whom were guests at last year’s Notting Hill Carnival, a session that leaves its imprint on Sancho Panza’s 20th anniversary for years to come. Freddy has been DJing for 30 years, and produced music under the name “Blackfeet” which was released on Norman Cook’s Skint Records.

DJ & Producer, Eren has rocked endless conceivable dance floors from underground raves to exclusive fashion after show parties, for the likes of Prada and Julian Macdonald in London, Paris and New York. He is a well respected dance music producer for artists such as Seal and Chaka Khan, but is most famous for his mix of Candi Staton’s ‘You got the love’ which has become one of the greatest dance music anthems of all time.

Expect the boat to be adorned with spots of many colours throughout the deck, a full Funktion One rig, generated by a beautiful crowd of party pirates, smiles and polko dots.

Join us for the first spot on boat party from “Sancho Panza” this year and a night of house music featuring tunes old and new. You are encouraged to wear spots and bring props. Ship Sancho leaves from Tower Millenium Pier next to the Tower of London, Lower Thames Street, EC3N 4DT from 8 pm – 2 am.

This boat party will sell out so please purchase tickets in advance to avoid disappointment. Limited early bird tickets on sale and available at £15 + booking fee, standard tickets £20 + booking fee. . Buy your tickets from skiddle: http://skdl.it/1mUFRpS or ticketweb: http://www.ticketweb.co.uk/event/116961