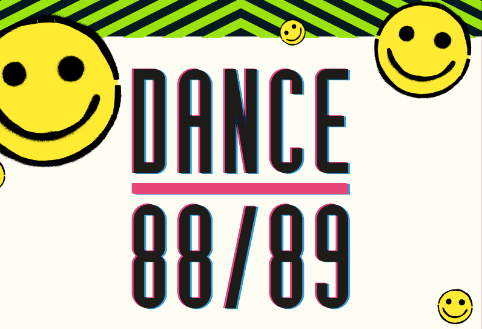 Visionary promoter and Sankeys club owner David Vincent has announced his intention to bring back the spirit of the second summer of love with his event ‘Dance 88/89’, a secret location rave to be held near Manchester on Easter Sunday March 27th from 5pm – 5am.  The mammoth line-up mirrors the music programming of the earliest, most influential acid house parties, bringing back such pioneering artists as Adamski, Alfredo, Colin Dale, Evil Eddie Richards, Fabio and Grooverider, Frankie Valentine, Graeme Park, MC Kinky, Marshall Jefferson, Mr C, Nicky Holloway, Terry Farley, Trevor Fung and 808 State.

Promoter David Vincent said, “Dance 88/89 is my own personal artistic project which celebrates the original music culture of classic underground acid house, in an authentic environment. It's aim is to put the fun back into dance music. I want to thank the Universe for allowing me to be able to tell the story of the beginning of dance music, through this event, in such a magical way. I also want to thank these legendary DJs, who have put their trust in me to re-produce the golden era of dance music to the world. These DJs are members of the original Beatles of house music and my childhood heroes. This party is a celebration of the return of the true legendary music and is done with a lot of love from my part."

David feels that now is an important time to re-ignite the lost spirit of acid house and to tell the story of the revolution to the younger generation, many of whom he feels don’t understand where the music comes from. He said,  “We now have a dance music industry that is formulaic, predictable and corporate. Back then there was no ‘industry’, there was a pure innocence about it all.  I want to take people on a timewarp, back in time and give them the chance to have an authentic acid house experience. This will be achieved not only through the music programming, which totally reflects the line-ups of the day, but also through the lighting, the decor and the whole ambience.  We are even banning taking pictures with mobile phones as no one had phones then except the promoters or yuppies!”

“It’s funny,” said David, “that house music is now a mainstream industry and a major accepted part of British culture, but when it first kicked off it was a revolutionary movement, it tore down the walls of UK society.  The police constantly tried to shut it down and eventually brought in the Criminal Justice Act, the media whipped up a total moral panic against acid house.  Those same tabloid newspapers that printed front page scare stories back in the day are now queuing up to interview me about this concept.  It’s gone completely full circle.  All of this is testament to the enduring power of house music, that it’s still going strong almost 30 years later.”

There is already a euphoric buzz going through the dance world about this event and with early bird tickets available at just £20, there’s more than enough reason for a smiley face! Early bird tickets for Dance 88/89 UK can be purchased from Skiddle http://www.skiddle.com/search/keyword.php?keyword=dance+88%2F9

This UK event precedes the launch of Dance 88/89 in Ibiza this summer.  The party will take place every Wednesday at Sankeys Ibiza and is anchored by iconic Ibiza legend Alfredo and original Acid House pioneer Bushwacka as residents.  They will be joined by a changing weekly programme of guests made up of the aforementioned artists, bringing back the true spirit of Balearic beats and acid house to where they originated from.  Early bird tickets for Dance 88/89 at Sankey's Ibiza can be purchased for €10  from Skiddle http://www.skiddle.com/whats-on/Ibiza/Sankeys-Ibiza/Dance-8889/12617060/