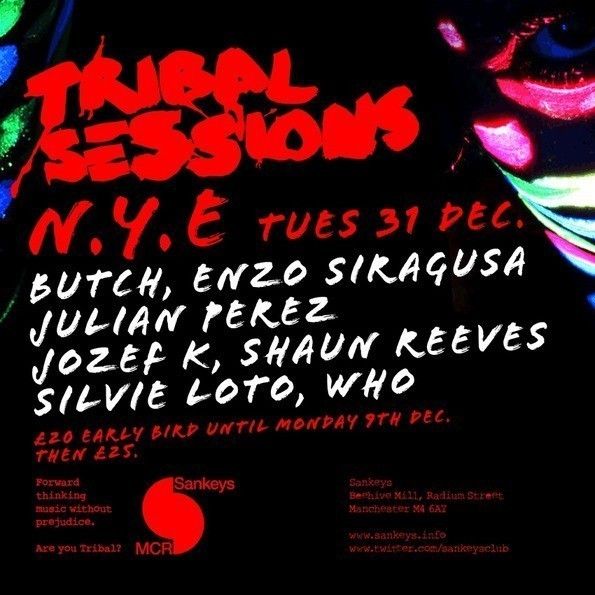 Continuing from their colossal ‘Rise Of The Phoenix’ launch weekend Sankeys Manchester reveals a festive programme of fun-fuelled events to shake off that Christmas slump and keep you dancing into the New Year, including sets from Steve Lawler, Matthias Tanzmann, 2manydjs, Butch, Enzo Siragusa, Darius Syrossian and Shaun Reeves.

Boxing Day will see some of the most respected names in underground house and techno taking control, with long term ally and VIVa Music head honcho Steve Lawler leading the charge for a special VIVa Warriors showcase. Dancefloor pounding sets will also come from Moonharbour’s front man Matthias Tanzmann, and a live performance from Detlef, who earned his Warrior status as VIVa resident for Sankeys Ibiza this summer. Joining her white isle comrade Detlef, Miss Soulfly battled stiff competition to win her residency through a Burns Studio contest. Sankeys’ Spektrum will be hosted by VIVa cohorts Departure, who bring their inner circle of much loved residents along with New York bred Sankeys regular Dave Rosario.

On Saturday 28th Sankeys will welcome one of electronic music’s biggest acts through their doors as 2manyDJs pitch up for a night of sonic adventure. As one half of world-renowned act Soulwax, 2manyDJs have forged a lauded reputation for eclectic sets that keep the party pumping and are always top of their game. Joining the Belgium duo, bass-smiths Freestylers thrilled eager fans earlier this year with the release of ‘The Coming Storm’ – their first album in six years. Their distinctive mash-up style fuses darker elements of dub and D&B with breakbeat production style and a stage presence gained from over 15 years of dancefloor devastation. Special guests and more surprises have yet to be revealed for this date.

Driving the party into 2014 on New Year’s Eve will be Enzo Siragusa, founder of highly regarded underground music institution Fuse who raised the bar when his weekly Fuse residency at Sankeys Ibiza became one of the most talked about events on the island this year. With over one hundred releases in the past five years on influential labels such as Cocoon, Visionquest, Desolat and his own Bouq, Butch has garnered global acclaim and was cited as ‘Most Charted Artist’ by Resident Advisor. An intrinsic part of Balearic club culture has seen regular appearances at Sankeys Ibiza as well as Space and Ushuaia. After a busy summer that’s seen him release on esteemed labels such as One Records and Sasha’s Last Night On Earth, it is with fitting style that Jozef K returns for a homecoming set of epic proportions to see in the new year with his Sankeys family. Adding his distinctive sound to the mix, Visionquest’s Shaun Reeves loves to explore the deep and twisted realms of house but always with a keen sense for the dancefloor. Completing proceedings is Father & Son’s label boss and Sankeys NYC and Ibiza regular Julian Perez, with support coming from Silivie Loto and Who.