Sasha to be joined by Kölsch, Dusky, Jon Dasilva and Paul Woolford for reFracted:live tour this December. 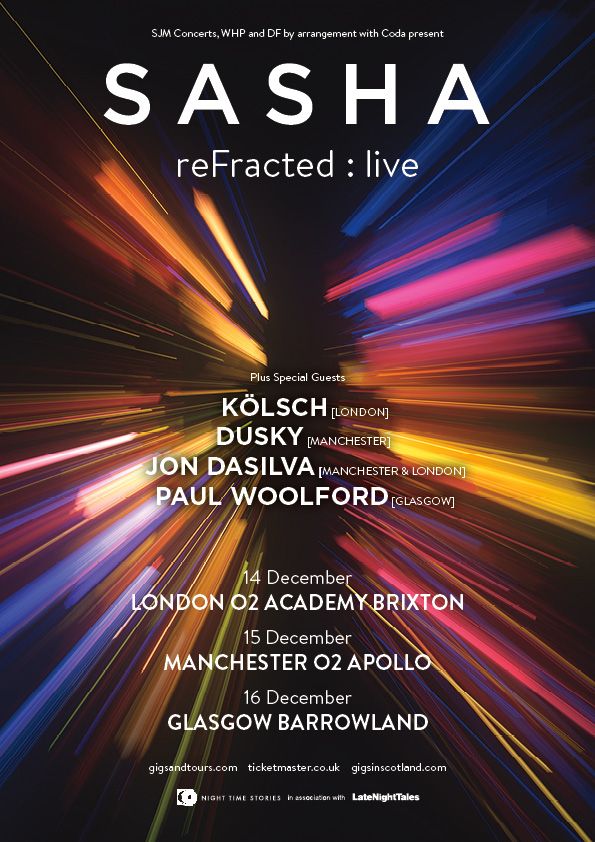 Sasha to be joined by Kölsch, Dusky, Jon Dasilva and Paul Woolford for reFracted:live tour this December.

Ever delivering something fresh and exciting, Sasha announces the full line ups for his reFracted:live shows in December. He will be joined by Kölsch and Jon Dasilva at Brixton Academy on 14th December; Dusky and Jon Dasilva on 15th at Manchester’s Apollo; and Paul Woolford at Glasgow Barrowland on 16th, ensuring each show will be spectacular from doors opening. Intimate after parties exclusively for ticket holders are also in the works, including at Phonox and Sub Club.

‘Really excited to finally be able to announce the full line-ups for our December reFracted shows. We really wanted to make sure these shows were rocking from the minute we open the doors so have hand-picked a bill that can deliver that’ Sasha says.

Every aspect of this show is something the revered live artist has curated carefully and personally, from the iconic venues to the set list to a cherry-picked lineup. ’What’s really special about Brixton is that I’ve done so many DJ gigs there, hosted NYE there, festival after parties, but getting to play live there feels like an amazing trajectory’. Returning to Manchester is always a spiritual homecoming for him too, and fans there will be especially overjoyed that Sasha’s first ever mentor and original Hacienda resident Jon Dasilva will be warming up. Dasilva was the one who invited Sasha to his first gig at Hacienda and seeing this relationship come full circle is not one to miss. Glasgow’s Barrowland was also home to one of his very first gigs in Scotland twenty five years ago. ‘I was supporting 808 State, A Class and I think A Guy Called Gerald.. I always love playing to a Scottish crowd, I’ve got such a history in Scotland’.

On top of an epic bill throughout the weekend, things are ramping up with the set production and design to accompany the brand new music that Sasha has promised will be delivered. This will be the first opportunity to hear new tracks nobody has heard before outside the studio!

‘I've been spending every available minute in the studio with the team the past few months and can't wait to play this new music to you all live for the first time. Production designs are well underway and to say we're upping our game with the show design for this round of shows is an understatement. December can’t come soon enough!’