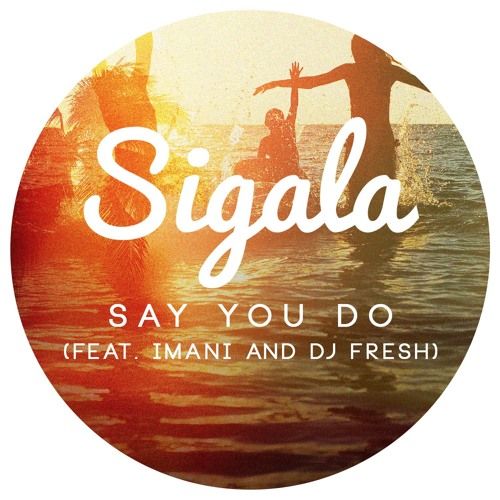 Hotly tipped UK producer, Sigala, heads into 2016 with a debut No.1 single (‘Easy Love’) under his belt and his second release, ‘Sweet Lovin’’ still in the UK singles chart Top 10 after 2 months (and only held off the No.1 spot on release by two Bieber singles). His new single, ‘Say You Do’ (featuring Imani and DJ Fresh) was premiered this weekend on Radio 1 courtesy of Danny Howard, being awarded the title of this week’s ‘Future Anthem’.

A departure from the big room house of his last two releases, ‘Say You Do’ sees Sigala dropping a tropical-influenced drum & bass banger (a return to the sound he fell in love with and first started producing as a teenager). The production is a result of his studio sessions with fellow Ministry of Sound artist, DJ Fresh, and the vocal comes courtesy of future star, Imani, the 16 year old former Brit school singer wrote her first song aged 10 and has already been compared to the likes of TLC, Rihanna, and Ariana Grande.

After heading out on a winter UK tour, Sigala returned to the studio to work with the likes of Craig David (who sang with Sigala for the recent Radio 1 Live Lounge session), Felix Jaehn, Fuse ODG, and more, as well as putting the finishing touches to further singles. He embarks on his debut US and Canadian tour in March, before returning for the UK summer festival season.

Combining the powerful hooks and uplifting vibe that’s become Sigala’s signature, ‘Say You Do’ could well make it a hat-trick for one of the UK’s hottest dance music talents. Remixes will be announced soon.